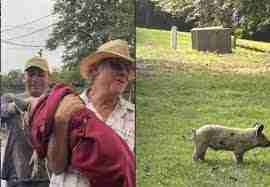 A pig who ended up at a nearby establishment that was knowledgeable about proper swine handling has been returned to his owner.

Nalls Produce posted a comment on social media saying, “How fortunate that a loose pig wandered one of the only establishments in the neighbourhood that has workers educated in proper swine handling with pig feed in stock.

Employees at Nalls Produce, a garden business in the Kingstowne neighbourhood, caught the pig and gave it over to the county’s animal control division.

According to second Lt. Kathleen Prucnal of the county’s animal protection police, the pig was given back to its owner following a community search.

The Fairfax County Police Department suggests calling their non-emergency dispatch number 703-691-2131 if they come across a loose pig, while 911 should be utilised in case of an emergency.

“Our police occasionally come with pigs in Fairfax County, and they always put the welfare of the public and the animals first. Over the course of a few days, dispatch received multiple calls, and each time, we made an effort to find and contain the animal, according to a statement from Prucnal.

The pig, according to Nalls Produce, was not a “mini” like Penny, the company’s own pig, but rather a “young full size piggie.”