Genshin Impact offers a great level of freedom when it comes to playstyle. With a huge cast of characters wielding different visions and skills, a massive range of unique weapons with specific abilities, and plenty of elemental interactions to spice up your fights, there’s no one specific way to play the game (we’ve even seen Genshin Impact Barbara as a DPS in the past, anything is possible).

But there’s something that many new players overlook (and long-term players both love and hate), and that’s the significance of the almighty Genshin Impact artifacts. Picking the best artifacts for your favourite characters can make a whole world of difference to how you fare in battle, and can also make for some very fun boosts and buffs to enhance your fighting flair. But, with heaps of different sets, bonuses, and a healthy pinch of RNG, they can be a pretty hefty concept to get your head around. And that’s where we come in. In this guide, we’ll tell you all about the best Genshin Impact artifacts, how to make the most of their stats, and where to get them from, so you’ll be grooving with the archons in no time.

What are Genshin Impact artifacts?

Artifacts are the main way to boost your stats in Genshin Impact, offering a variety of buffs and set bonuses that you must choose carefully to suit the type of character you’re equipping them to. You can equip a maximum of five artifacts on any one character, and many give you benefits for using sets of two or four of the same kind.

There are five different types of artifact. Each piece has a main stat, which you can see below.

After that, the artifact has a set of substats, determined by RNG. As you enhance the artifact, a random substat will be added or upgraded at certain intervals. Here are the potential substats, each of which can either come as a flat rate or a percentage increase:

Then, there are the set bonuses, unique to each artifact set. It’s up to you how you use these – you can mix and match, using two sets of two to combine the benefits, though for most builds it’s recommended to stick to sets of four, to take advantage of the stronger bonuses. You can see each of the set bonus effects in our list of the best Genshin Impact artifacts. 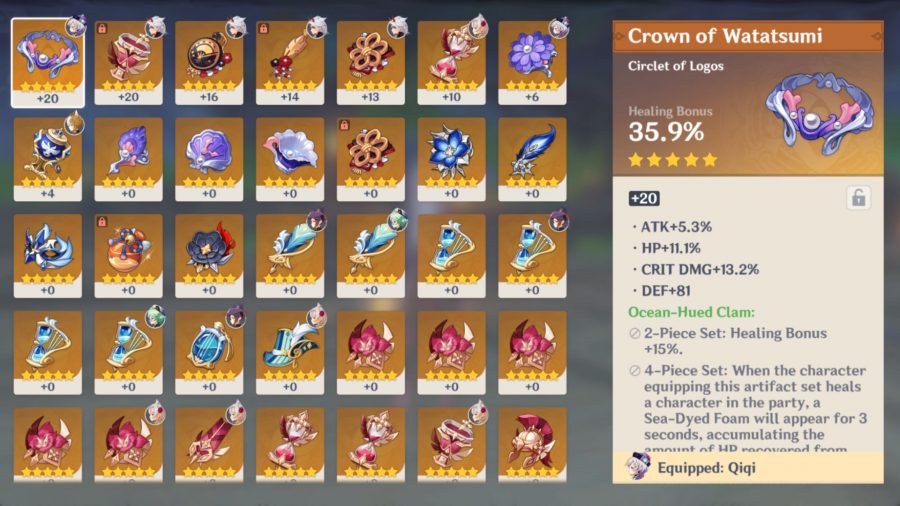 What are the best Genshin Impact artifacts?

Here’s a list of the best Genshin Impact artifacts you can get in-game at the moment. All of these sets come in either four-star or five-star quality. Five-star is the highest quality, and therefore has higher base stats than four-star artifacts. However, sometimes the RNG archons aren’t on your side, and you may find that a four-star artifact has better substats for you, so keep that in mind when picking which ones to equip.

Click on the names of the recommended characters for each set to see their full build guides. 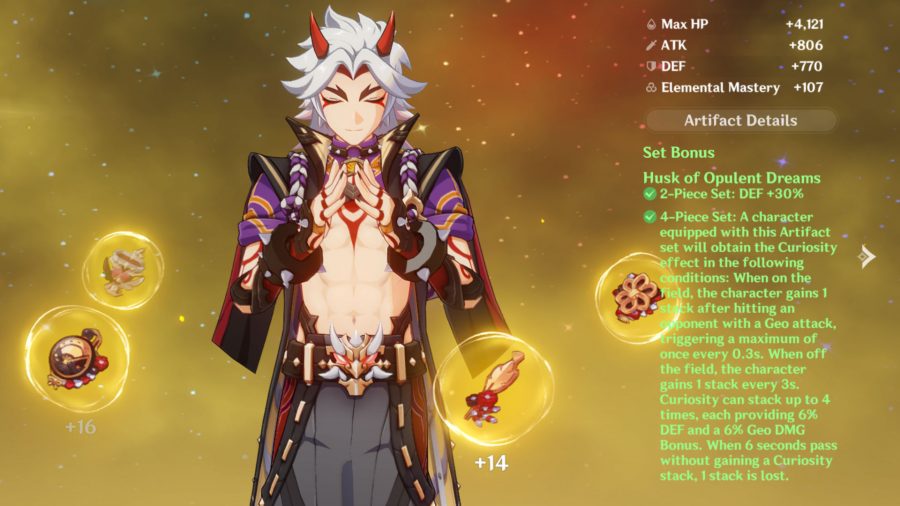 Two pieces equipped: defence +30%
Four pieces equipped: you obtain the curiosity effect in the following conditions: when on the field, gain one stack after hitting an opponent with a geo attack, triggering a maximum of once every 0.3 seconds. When off the field, the character gains one stack every three seconds. Curiosity can stack up to four times, each providing 6% defence and a 6% geo damage bonus. When six seconds pass without gaining a curiosity stack, one stack is lost

Obtained from the Slumbering Court domain in Fort Hiraumi, on Seirai Island.

Obtained from the Domain of Guyun in Sea of Clouds, Guyun Stone Forest.

Obtained from the Peak of Vindagnyr domain on Dragonspine, in Mondstadt.

Two pieces equipped: physical damage +25%
Four pieces equipped: increases your charged attack damage by 50% after defeating an opponent, and its stamina cost is reduced to zero for ten seconds

Obtained from the Clear Pool and Mountain Cavern domain in Minlin, Mt. Aozang, or from the Bloodstained Chivalry Artifact Strongbox.

Obtained from Momiji-Dyed Court domain on Yashiori Island in Inazuma.

Obtained from the Peak of Vindagnyr domain on Dragonspine, in Mondstadt.

Note that Lavawalker doesn’t fare as well as other pyro-focused sets like Crimson Witch of Flames – so we advise against spending the time to farm and upgrade this one. The two set bonus is very situational, and likely won’t benefit you most of the time, and there are better four-set bonuses to benefit from. 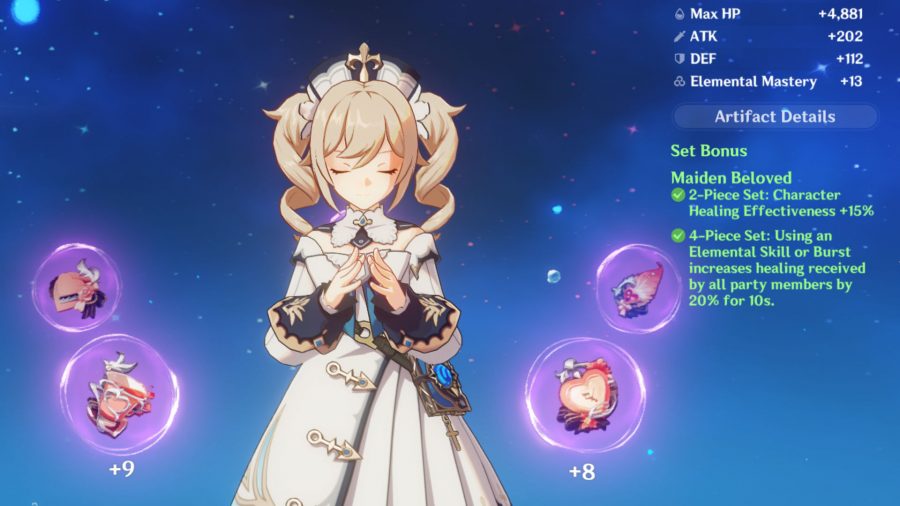 Two pieces equipped: character healing effectiveness +15%
Four pieces equipped: increases healing received by all party members by 20% for ten seconds after you use an elemental skill or burst

Obtained from Valley of Remembrance in Windwail Highland, near the Dawn Winery. You also receive some pieces from adventure rank and journal rewards.

Obtained from the Clear Pool and Mountain Cavern domain in Minlin, Mt. Aozang, or from the Noblesse Oblige Artifact Strongbox.

Two pieces equipped: physical damage +25%
Four pieces equipped: increases attack by 9% for seven seconds when an elemental skill hits an opponent. This effect stacks up to two times, and you can trigger it once every 0.3 seconds. Once two stacks are reached, the two-set effect is doubled

Obtained from Domain of Guyun in Sea of Clouds, Guyun Stone Forest.

Obtained from Momiji-Dyed Court domain on Yashiori Island in Inazuma.

Two pieces equipped: HP +20%
Four pieces equipped: upon hitting an enemy with an elemental skill, all nearby party members gain 20% attack and 30% shield strength for three seconds. You can trigger this effect once every 0.5 seconds, even if the character equipped with the artifact is not on the field

Tenacity of the Milelith recommended characters: 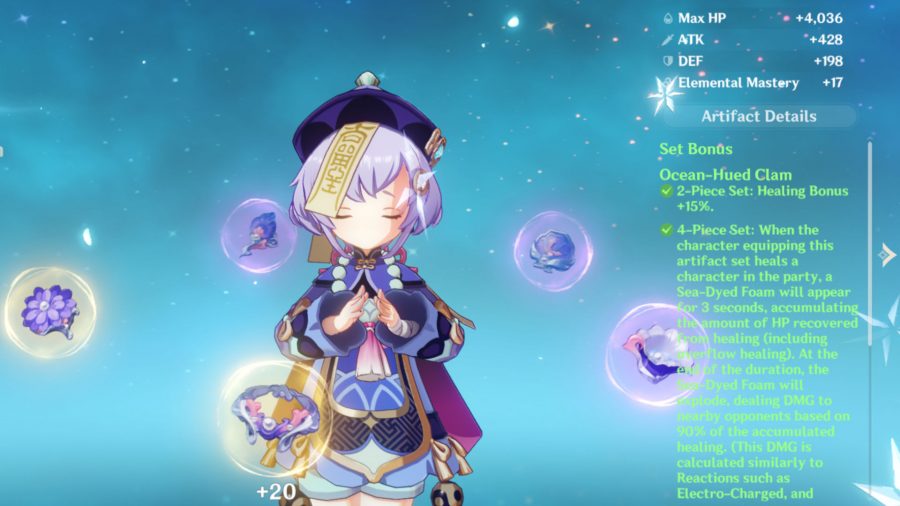 Two pieces equipped: healing bonus +15%
Four pieces equipped: upon healing a party member, a foam appears, accumulating healed HP for three seconds. The foam then explodes and deals 90% of the HP healed as damage to nearby enemies. Max accumulated healing is 30,000 HP, including over-heal. There can only be one foam active, but it remains even if the character leaves the field. Foam cooldown is 3.5 seconds

Obtained from the Slumbering Court domain in Fort Hiraumi, on Seirai Island.

Two pieces equipped: electro damage +15%
Four pieces equipped: increases damage caused by overloaded, electro-charged, and superconduct by 40%. Triggering such effects decreases your elemental skill cooldown by one second. Can only occur once every 0.8 seconds

Much like Lavawalker, this set isn’t as good as other electro artifacts (for example, Thundering Fury). The electro resistance won’t be of much benefit to your electro character except under very specific circumstances, and, though the four-piece bonus is decent, other sets will likely help you more.

Obtained from Valley of Remembrance in Windwail Highland, near the Dawn Winery.

Obtained from world bosses and weekly bosses, as well as the Wanderer’s Troupe artifact strongbox. 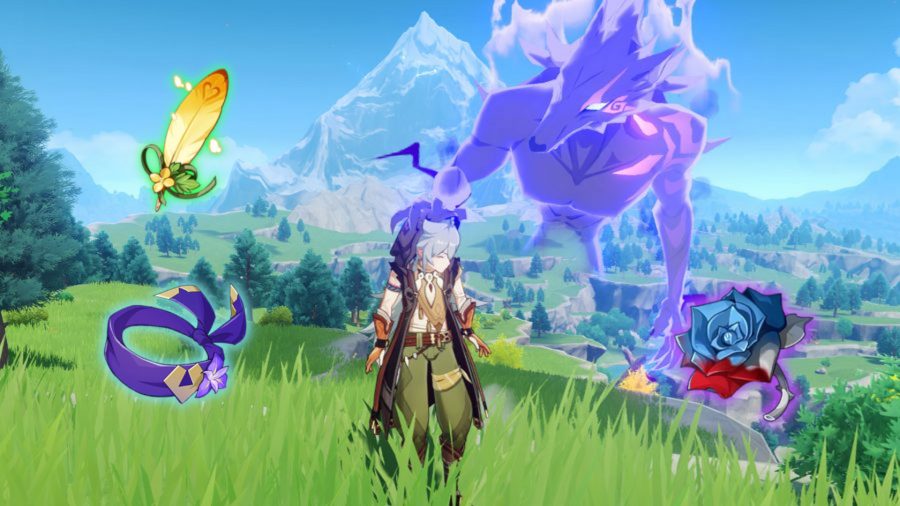 These are artifacts that you can find easily on your travels, often through opening chests or defeating enemies. They can come in three-star or four-star quality. While not as strong as the sets listed above, they can act as good alternate artifacts until you get your hands on the sets you want.

How do I get Genshin Impact artifacts?

You’ll gather plenty of Genshin Impact artifacts on your travels across Teyvat, whether they’re from opening chests or defeating enemies, but these are usually lower quality pieces. Shrines of Depth, adventure rank rewards, the traveler’s journal, events, crafting artifact strongboxes, and more also provide you with handy random pieces, but if you want a specific set, you’ll need to farm certain domains or bosses until you get the ones you want.

After you’ve snagged a set with the right stats for you, you’ll want to enhance them. This can be done through the character menu, in the same way you level up weapons, but the only materials you can use are other artifacts (along with a hefty sum of mora, of course). So, even all those Lucky Dog pieces that you’ve never found a use for come in handy after a while. 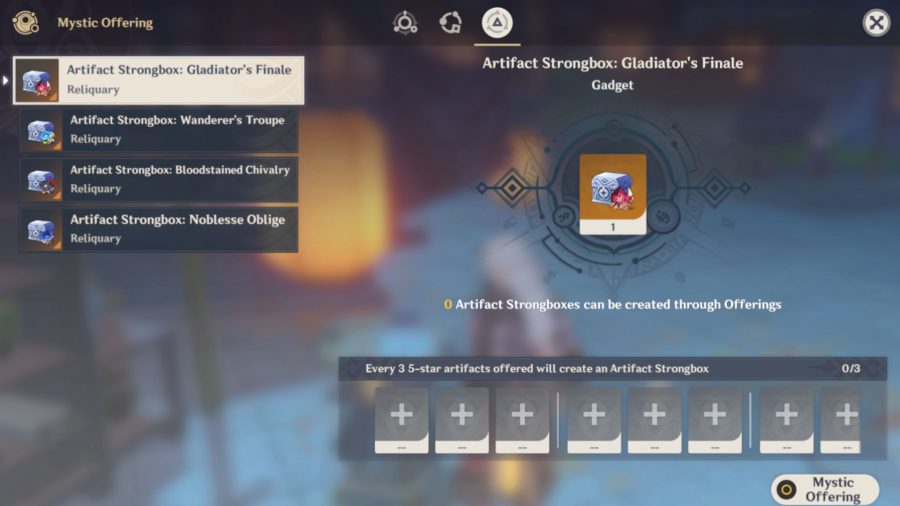 What is a Genshin Impact artifact strongbox?

While this mechanic allows you to make use of artifacts with unfavourable substats in hopes of getting something better, it’s a pretty expensive method. The stats and substats of the item created in the artifact strongbox are equally as RNG-based as ones you earn in domains, so there’s no guarantee you’ll get what you want. Therefore, it’s sometimes better to use unwanted five-star artifacts to enhance more useful pieces. However, it’s a good way of trying your luck with new artifacts if you don’t want to spend any more resin.

And that’s it for our Genshin Impact artifacts guide. We’ll be sure to add new artifacts to the list as they come out, so check back from time to time. For now, why not head over to our list of the best mobile games in 2022 to see if you can find something new to play.