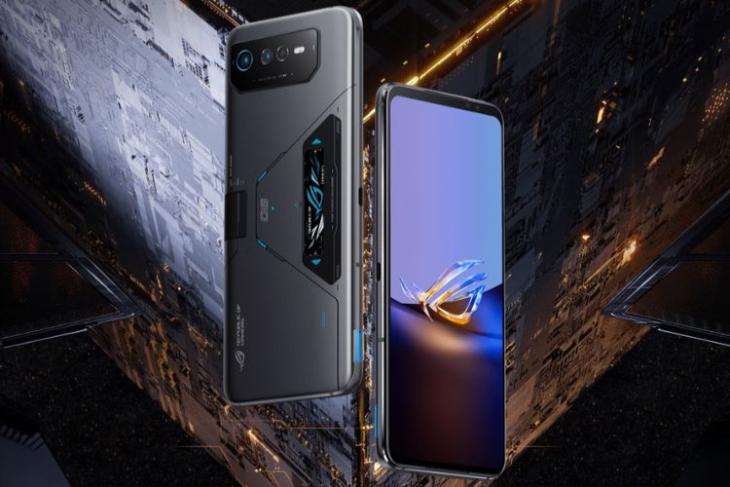 Asus has launched the new variants of the ROG Phone 6 — the ROG Phone 6D and the ROG Phone 6D Ultimate globally. The new ROG gaming smartphones come with the MediaTek Dimensity 9000+ chipset instead of the Snapdragon 8+ Gen 1, a new color option, and more. Have a look at the details.

The Asus ROG Phone 6D Ultimate comes with the same design as the ROG Phone 6 and the Phone 6 Pro and features a secondary display at the back. The difference is the new Space Grey matte finish. The main display is rated at 6.78-inch. It has the Samsung AMOLED panel, support for a 165Hz refresh rate, and a 720Hz touch sampling rate. There’s also support for Delta-E < 1 color accuracy, HDR10+, and DC Dimming. The 2-inch OLED matrix color display can show various animations and alerts too.

The phone comes with AirTrigger 6 with ultrasonic sensors and various gestures. The X-axis linear motor allows for up to a 130 Hz vibration frequency for an enhanced gaming experience. There’s also the GameCool 6 cooling system and AeroActive Portal to continuously supply cool air from the outside for 20% improved thermal efficiency. The ROG Phone 6D Ultimate also supports the all-new 360-degree CPU Cooling tech.

The Dimensity 9000+ chipset makes way for the MediaTek HyperEngine 5.0. This, clubbed with the Armor Crate app, is meant to further improve the gaming experience. The phone comes with 16GB of LPDDR5X RAM and 512GB of UFS 3.1 storage.

For photography, there’s a 50MP Sony IMX766 main camera, a 13MP ultra-wide lens, and a 5MP macro camera. The front snapper stands at 12MP. A 6,000mAh battery is there with support for PD Charging and a 65W adaptor. It runs Android 12.

The ROG Phone 6D is totally like the ROG Phone 6D Ultimate, except for the RAM+Storage configuration. It comes with 12GB of RAM and 256GB of storage.

Asus has launched the ROG Phone 6 Batman Edition (both Dimensity 9000+ and Snapdragon 8+ Gen 1 variants) in Mighty Black. The phone comes with a collectible case design, themed live wallpapers, charging animation, and Batman-themed AOD and incoming call UI. There are exclusive accessories like the Batman Aero case, Batman ejector pin, and Bat-signal projector. Other specs remain the same as the other ROG Phone 6 models.

There’s no word on when they will be available in India or other regions yet.