With the recent release of Kirby and the Forgotten Land (arguably one of the best Kirby games in the series), the little pink puffball has reached new heights in popularity. But what about all the other highlights of his video game career?

While he’s not been around as long as Mario, Donkey Kong, or Link, Kirby has been with Nintendo for a long time and has had at least one new game on every Nintendo console since the NES. At this point in time, he’s been the star of over 30 games and many of them have been absolute classics, so we’ve put it upon ourselves to choose the eight best Kirby games.

Whether you’ve been a Nintendo devotee since the days of the NES, or only joined the ranks with the advent of the Switch, we’re confident there’s a Kirby game that you’ll adore. Considering the long list of games in the series, it was difficult to narrow it down to just nine choices, but these, like the hungry pink protagonist himself, are some of the most well rounded.

The best Kirby games are: 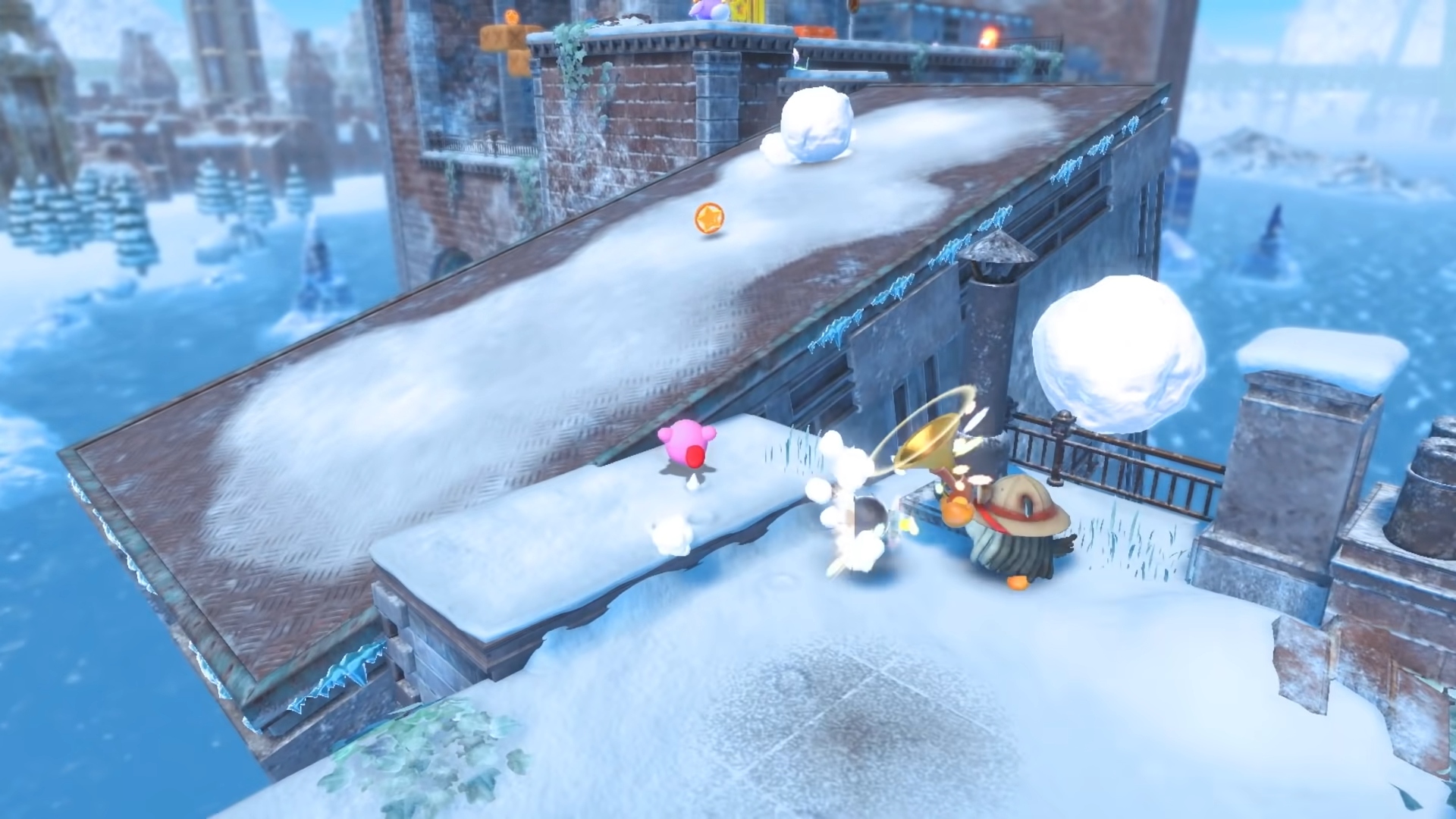 Kirby and the Forgotten Land

Unlike his many of his 1990s contemporaries, Kirby didn’t make the transition into 3D until this year. Nonetheless, in stepping into a new dimension, the series has also reached new levels of quality, with many fans lauding Kirby and the Forgotten Land as potentially the best Kirby outing to date.

From the zany humour of the new Mouthful Mode, through to the intriguing use of post-apocalyptic human settings, it’s easy to see why so many people love this game. While it tries a lot of new things, it also remains true to many of the features the defined the series, making this feel like a natural evolution for Kirby, rather than a forced revolution.

There’s a lot more we could say about this, but if you want to read more, check out our Kirby and the Forgotten Land review. 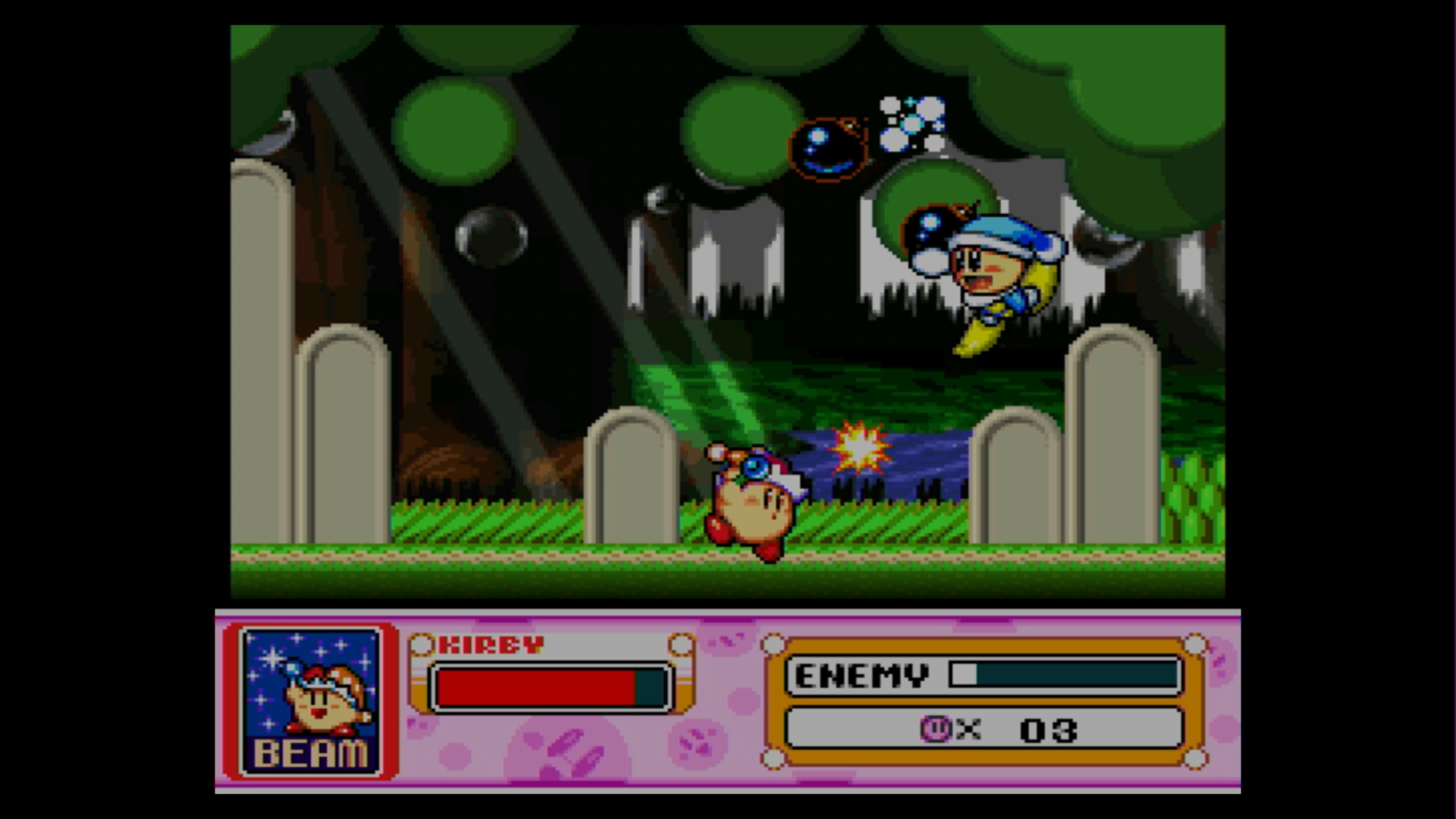 Better known as Kirby’s Fun Pak in the UK, Kirby Super Star could make up this entire list all on its own, because it’s an eight in one affair. On top of a remake of the original Kirby’s Dreamland (which enhances the gameplay, but cuts a fair bit of content too), it features several new Kirby ‘games’ which tell the story of his conflict with Meta-Knight, Dynablade, and the sinister Marx – although some of them are really just mini-games.

Perhaps most appealing was the addition of The Great Cave Offensive. In this game, you’re exploring a large Metroidvania world to try and find treasures from various Nintendo games (including Mr. Saturn, a DK Barrel, the triforce, and more) and with its excellent soundtrack and charming visuals, this is a game you’ll have a lot of fun with. If you’d like to give it a try, it’s available via the Nintendo Switch Online subscription service. There’s also a DS version (Kirby Super Star Ultra), though that is very rare at this point.

As a side note, in many ways, it’s easy to see this as something as a precursor to Super Smash Bros. what with its crossover elements and a few gameplay similarities, but we’ll talk about that more later. 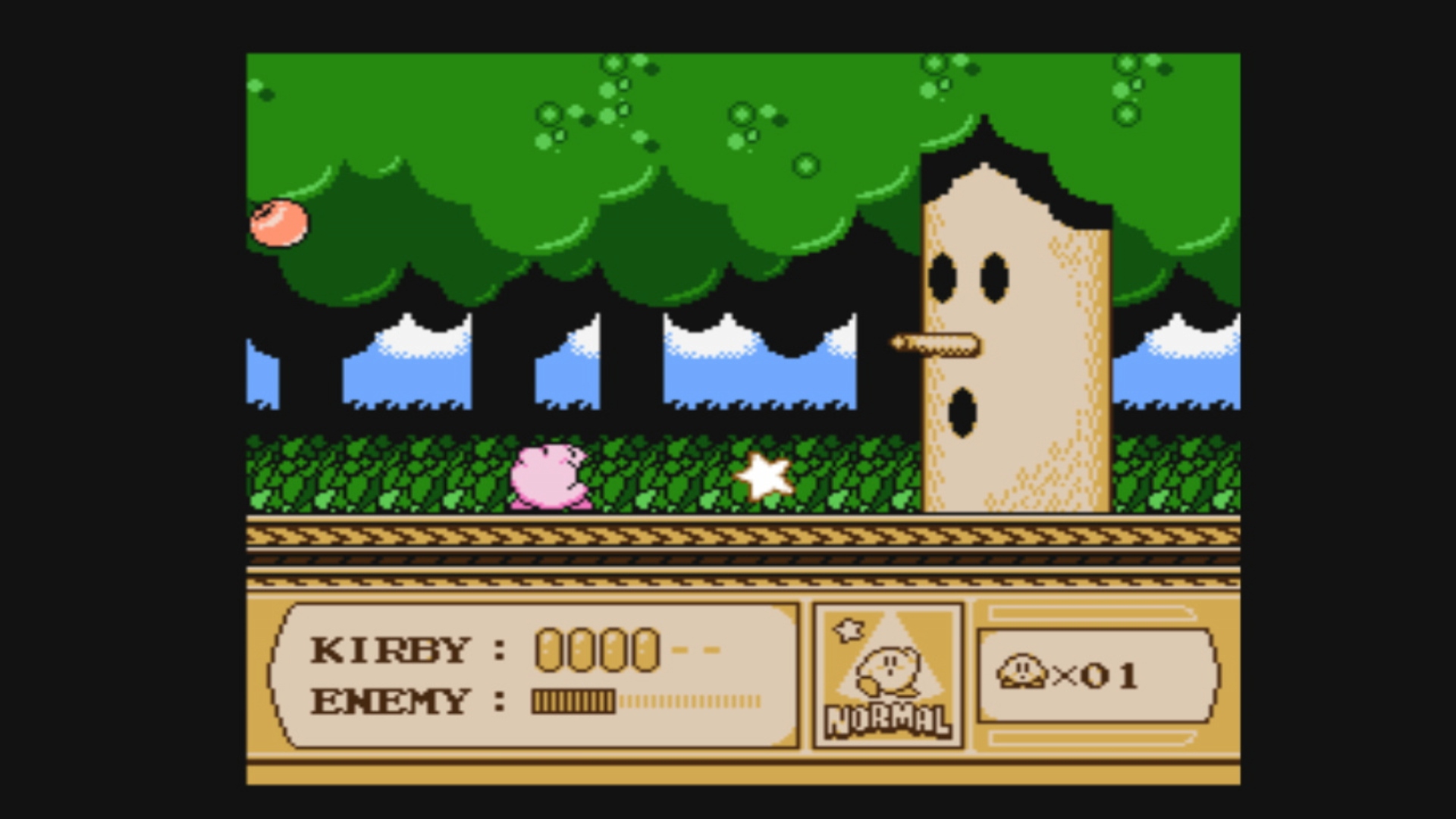 Kirby’s single NES adventure (which also received an enhanced Game Boy Advance remake) was notable for being the first appearance of Meta-Knight, as well as being the first time Kirby could absorb powers from his enemies. It was also one of the final NES games to be released, meaning that in terms of gameplay and presentation, it stands a good head and shoulders above the majority of platformers on the console.

If you’re put off by the retro visuals, then the Game Boy Advance version might be more appealing – especially as it also added a new mode called Meta Knightmare where you actually get to play as Meta-Knight.

If you want to try the original version of Kirby’s Adventure, it’s included with the NES games available through a Nintendo Switch Online subscription, or on the Nintendo Classic Mini. 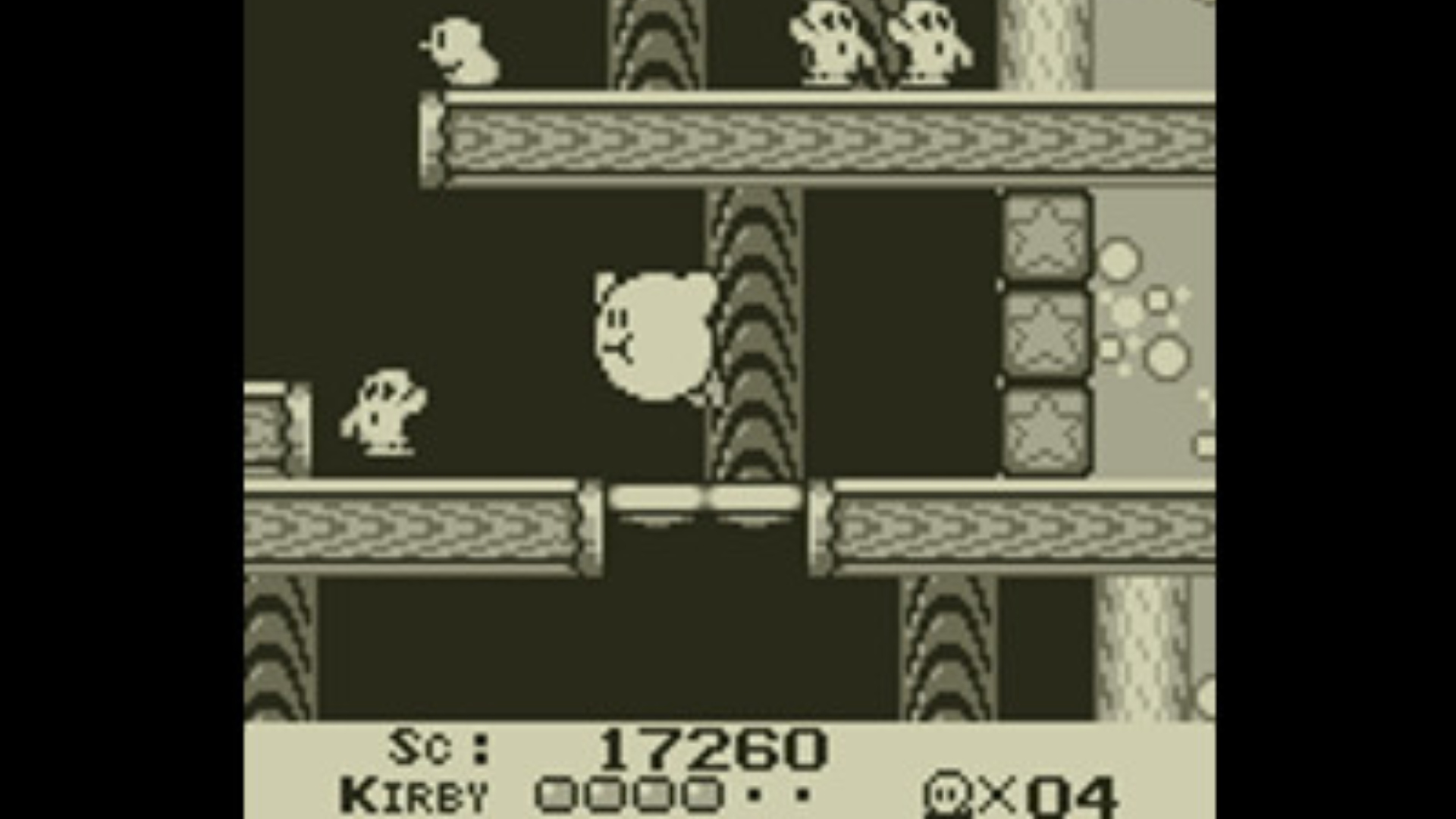 This was Kirby’s very first game, and while experienced players will be able to get through it very quickly, that doesn’t change the fact that it’s a fun ride while it lasts. Those who became familiar with Kirby through later games might be surprised that in this one, Kirby doesn’t gain an enemy’s powers if he eats them.

It is, admittedly, a more primitive experience than the later games (partially due to the limitations of the original Game Boy), but it’s not without its own charms. Gamers of a certain age are likely to feel a lot of nostalgia for this retro title and unlike a lot of the hard-as-nails platformers that were coming out at the time, modern gamers shouldn’t have too much trouble finishing this one. 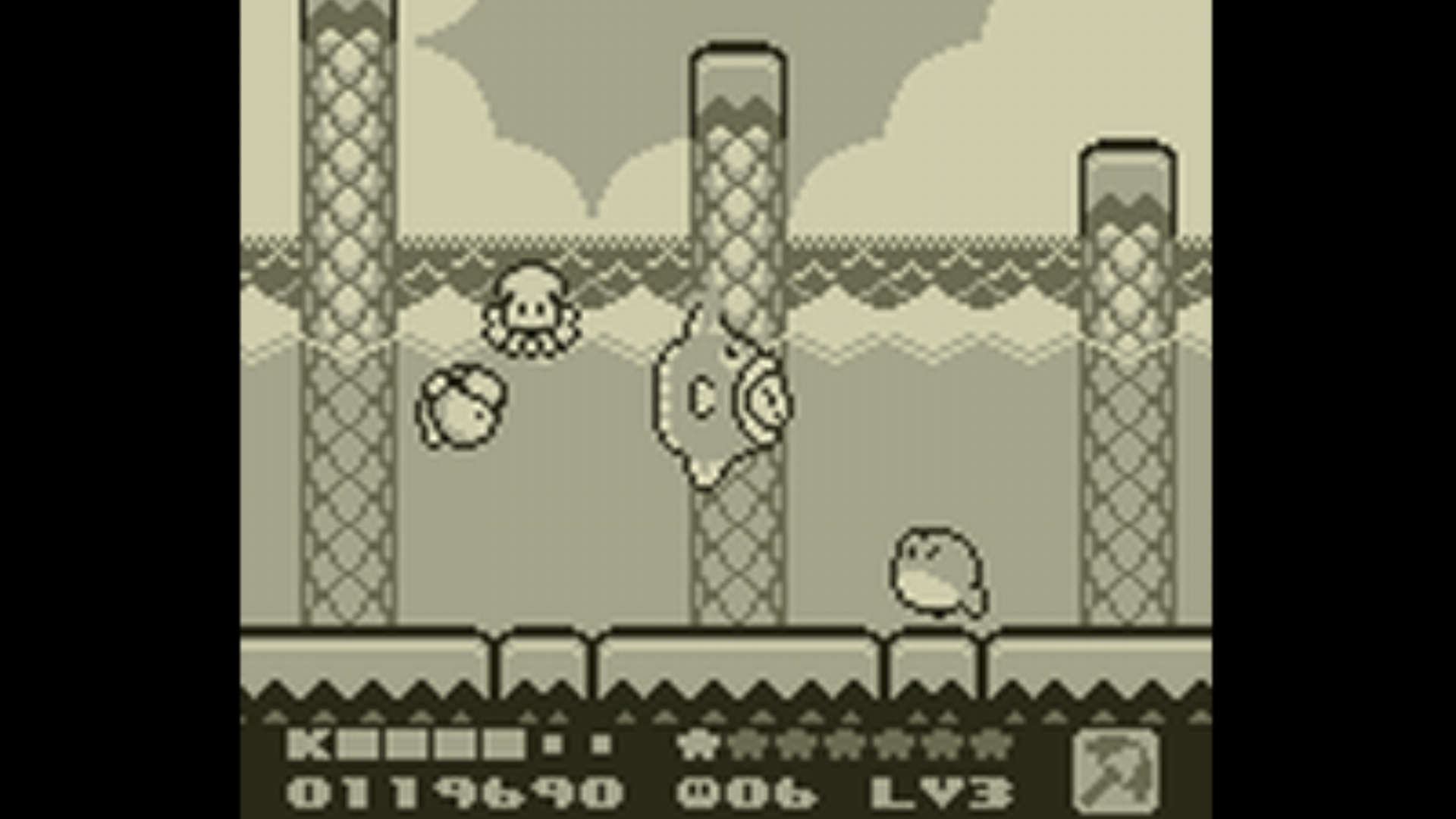 Kirby’s Dream Land and Kirby’s Dream Land 2 both bring a lot to the Kirby table and remain enjoyable experiences, so it didn’t feel right to include one and not the other. In this sequel to the original game (which actually came after Kirby’s Adventure and a few spin-off games), Kirby can now absorb the abilities of his enemies, and we’re also introduced to his animal friends, Rick, Coo and Kine – a hamster, owl and fish, respectively.

The addition of the animal friends adds quite a lot of diversity, as each of them responds differently to Kirby’s powers and therefore provides you with various methods for getting through levels and overcoming challenges. It’s really fun mixing and matching different pets with different abilities.

The game is available to buy in the 3DS eshop, but as that’s soon going to be discontinued, there won’t be an official way to play this or its prequel before long. Let’s hope original Game Boy games make their way to the Nintendo Switch Online service. 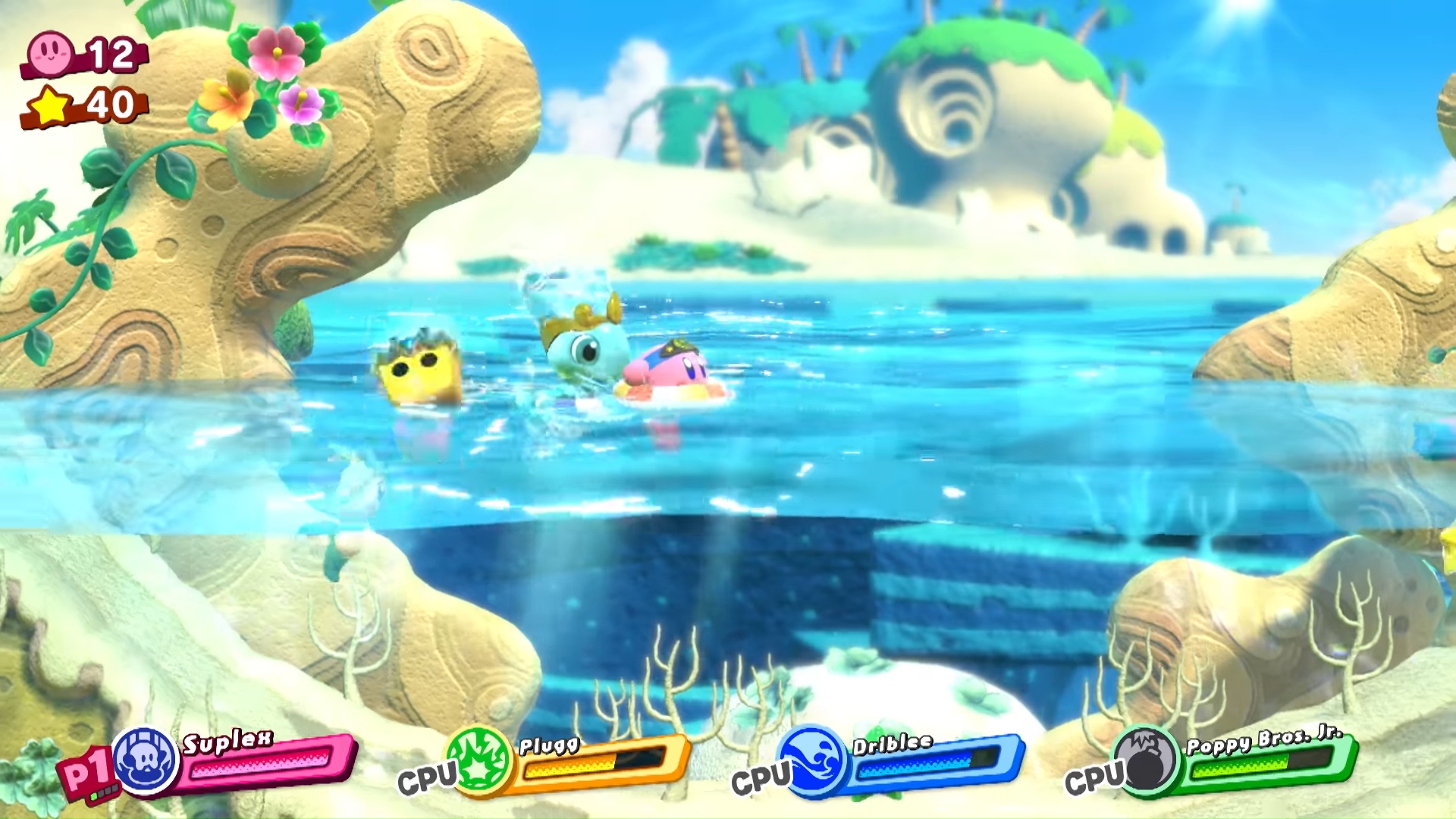 If you started with Forgotten Land and want to see what Kirby is like in 2D, then this is definitely a good starting point (and not only because it’s easy to get on Switch). As the most recent 2D Kirby adventure, it takes the established formula and polishes it up with extra copy abilities and lovely HD visuals.

You can also play this game cooperatively with up to three friends. In this game Kirby has the ability to turn his enemies into friends (something we’ve seen variations on with previous games), and this time you can turn three enemies into allies which are then either controlled by the CPU, or by your friends. 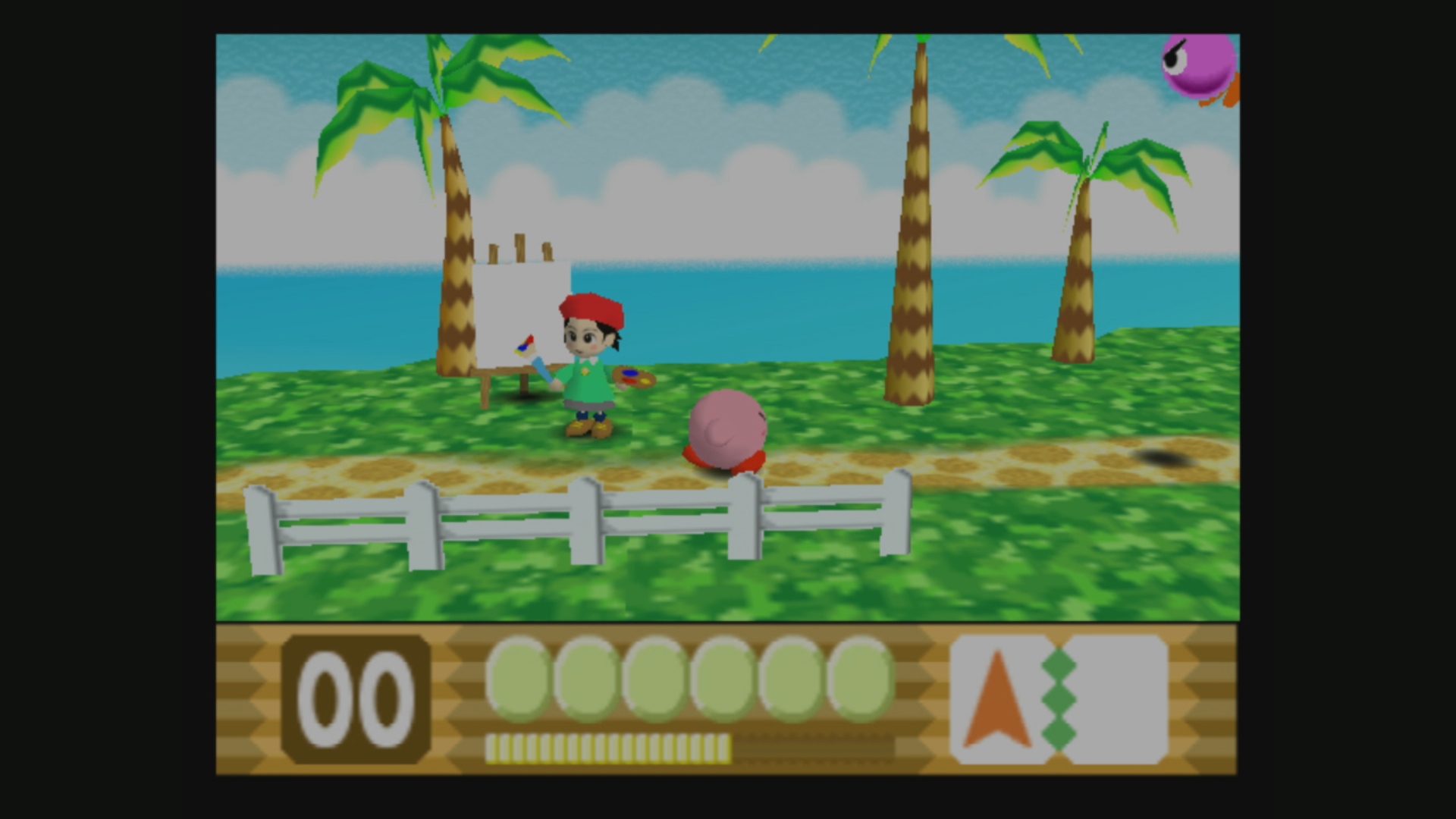 At the time, some fans were disappointed that Kirby’s Nintendo 64 outing wasn’t a fully 3D adventure (as it had been for Mario, Zelda, and Donkey Kong), but rather a 2.5D platformer. Today though, we can look back and appreciate for what it was: a solid gaming experience which experimented with different dimensions in a way that would not have been possible in earlier instalments.

This adventure sees Kirby travelling to different planets, which means that he visits locations which are quite different to those seen in previous adventures. Interestingly, one of these worlds appears to be a frozen, post-apocalyptic Earth, which possibly served as inspiration for some of the locales in Forgotten Lands. It also introduced mix abilities, where Kirby can combine two copy abilities to unlock something new, giving you literally hundreds of combinations to experiment with.

This game is available to play as a  Nintendo Switch Online N64 game, so if you want to try it, that will probably be the easiest way for you to do so. If you have access to a Wii U, the game is also available in its eShop, but it’s becoming increasingly difficult to purchase things via the Wii U eShop as Nintendo slowly bring the service to an end. 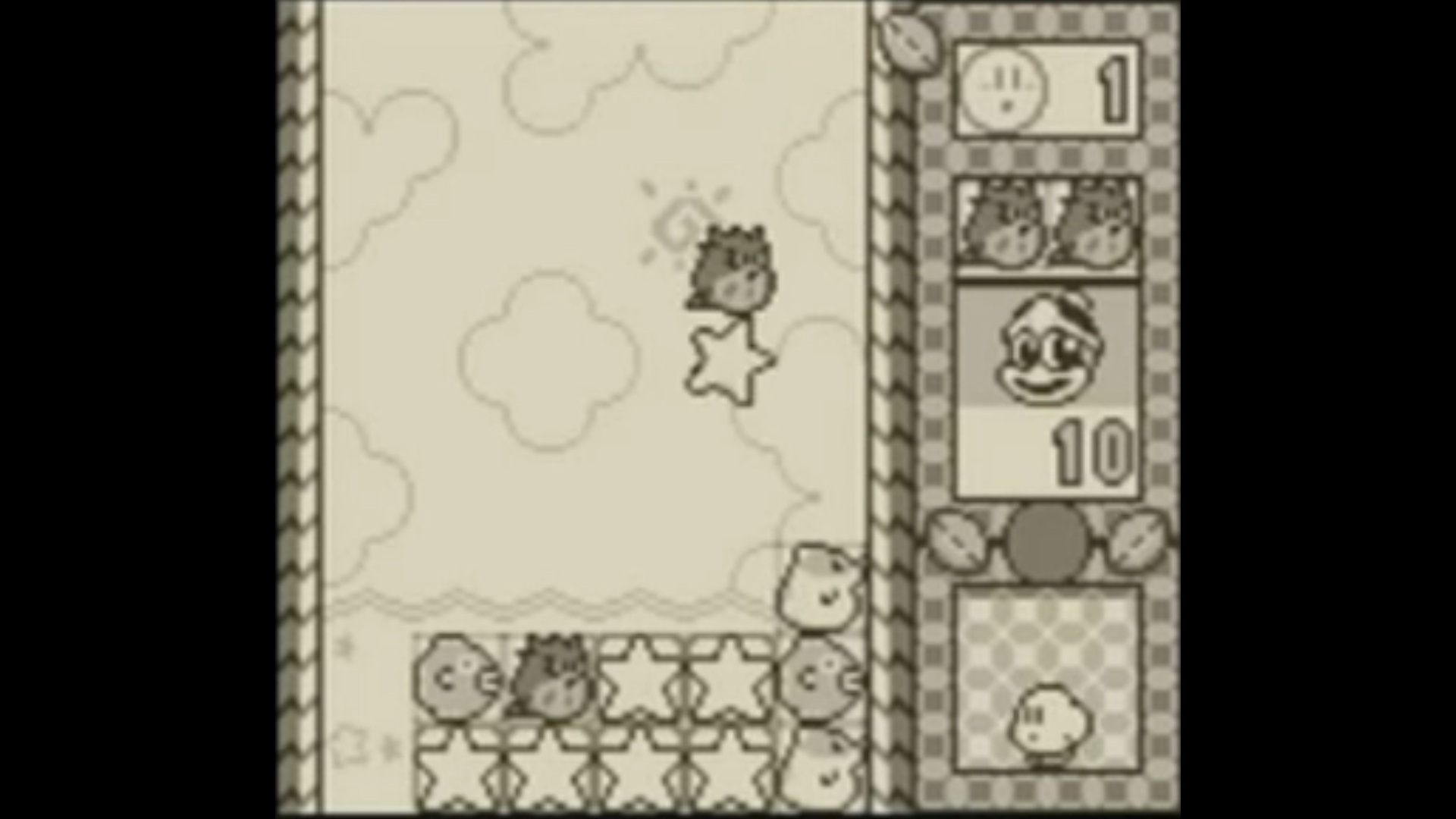 This will probably seem a bit of an obscure choice for this list, mainly because it’s a spin-off and the gameplay is completely different from normal Kirby games, but gosh darn it, this game gets unfairly overlooked. Really, it deserves to be on the same level of recognition and popularity as Dr. Mario and Tetris, though it’s relatively lateness to the scene (this was a 1997 original Game Boy game) is probably the reason it didn’t happen.

So what’s it all about? Well, the gameplay has Kirby’s various animal friends falling as blocks, along with stars. You have to clear away a certain number of stars in each level and you do this by connecting different Coos, Kines, and Ricks together using the stars, which then disappear, with rewards given for combos. It’s a perfect game to play if you ever have a long car or train ride ahead of you. 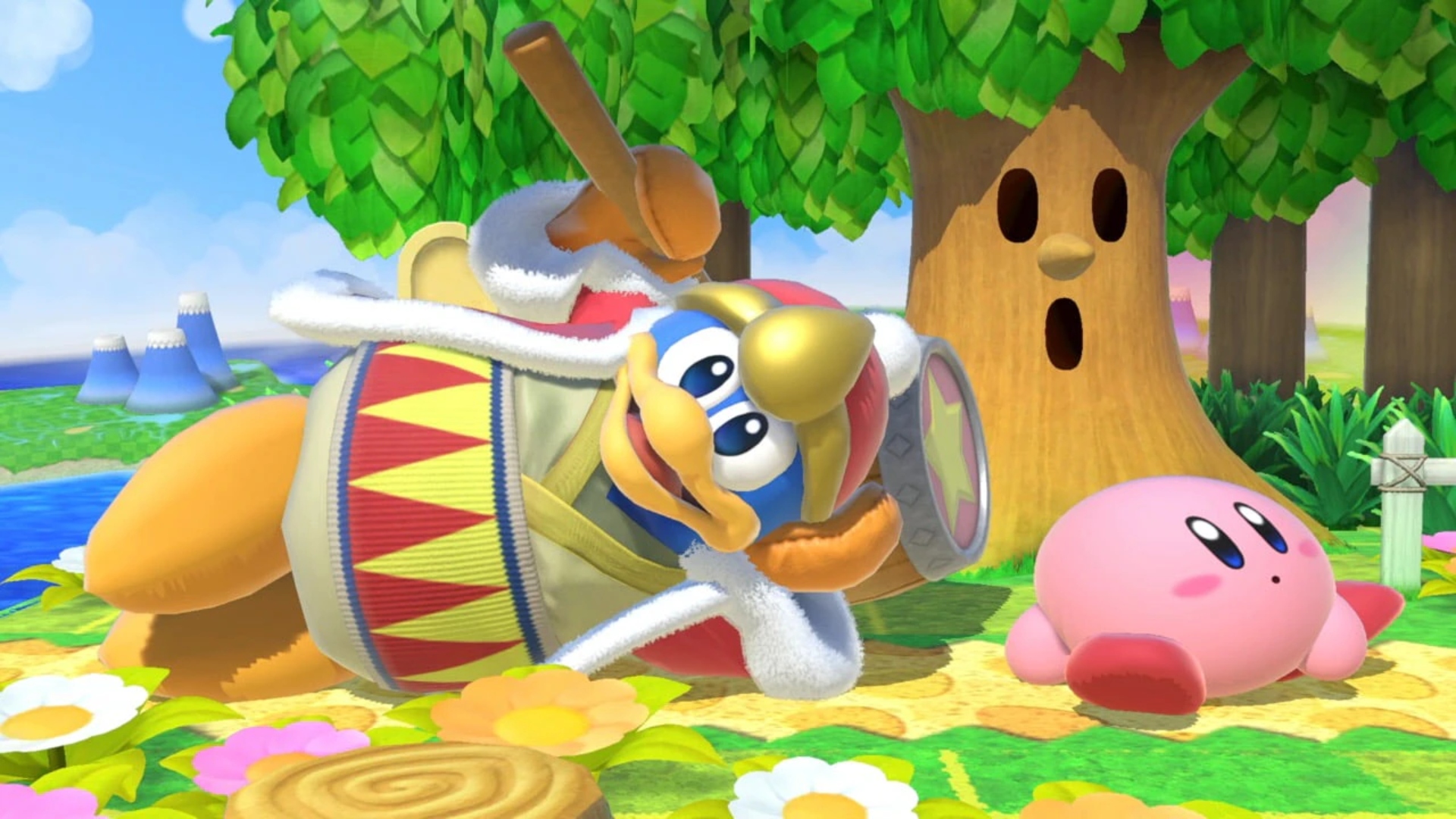 This might seem like an odd choice, after all, what makes these Kirby games? Couldn’t they just as easily be called Zelda games? Or Donkey Kong games? Even Final Fantasy games? But, actually, as both series were created by Masahiro Sakurai, you’ll notice that there are often a lot of similarities with gameplay, and that the Kirby cast tend to be given given especially prominent roles.

In Super Smash Bros. Brawl, it’s the efforts of King Dedede that save everyone meeting their demise at the hands of Tabuu, and his interactions with Kirby are downright heart-warming. Meanwhile, in Super Smash Bros. Ultimate, Kirby is the only survivor of Galeem’s cataclysmic attack, which leaves him in a position where he has to save the entire multiverse.

When playing the Subspace Emissary in Brawl, many gamers will most likely notice the similarities in gameplay to Superstar’s Great Cave Offensive. Even just in terms of simple handling, playing a Smash Bros. game feels very similar to playing a Kirby game, and considering Kirby’s prominent role in every Smash Bros. instalment, this is something fans are going to want to try, if they haven’t already.

For more Nintendo content, take a look at our guides on the best Zelda games and best Mario games.