Portable gaming consoles are big business right now. In fact, it feels like we’re seeing some of the best portable gaming consoles in recent years. Whether it’s the runaway success of the Nintendo Switch since its launch in 2017, or the hubbub around Valve’s brand-new handheld PC, the Steam Deck, it’s hot stuff. Better yet, we’ve got years of handheld gaming experience at our disposal to help you find the best one for your needs.

It’s not just big game companies getting in on the act, however. There’s GPD, Ayaneo, Playdate, and the OneXPlayer all vying for market share and gaining lots of popularity in recent years. And there’s also a bunch of the best gaming phones ever available, though we’re focused on larger, controller-having counterparts here. But how many get to be ranked among the best handheld gaming consoles you can buy today?

That’s where we’re here to help. Rather than endless Googling and scrolling through spec sheets and individual reviews, our on-the-go gaming expertise is on hand to offer up a clear and concise list of the best portable gaming consoles available now. And, if you’re looking for ideas on what to play once you’re in the portable realm, check out our best Switch games and best mobile games lists to make sure you’re ready for endless videogame fun.

Here are the best portable gaming consoles on the market: 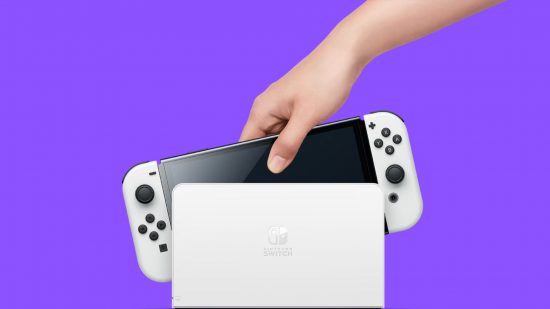 The best handheld gaming console is the Nintendo Switch OLED. Its RRP is set at $349.99 / £309.99, though you can often find it cheaper in bundles.

The Nintendo Switch OLED is undoubtedly the best portable gaming console on the market today. While it technically has a smaller library than the Steam Deck, current early issues mean that a lot of games don’t run quite right on Valve’s console.

The Nintendo Switch, however, has an exceptional library of first-party games from one of the best developers in history, Nintendo. Whether it’s The Legend of Zelda: Breath of the Wild, Bayonetta 3, Xenoblade Chronicles 3, or all manner of exceptional indie titles, the Switch’s success has helped fill its library with plenty of excellent games to play.

The console itself has an excellent, bright, and colourful OLED screen, good ergonomics, and the built-in ability to play on your TV at no extra cost. It’s excellently versatile, packed with great games, and easily the best handheld gaming console out there. The only downside, really, is Joy-Con drift, but there are plenty of alternative Switch controllers to solve that issue. 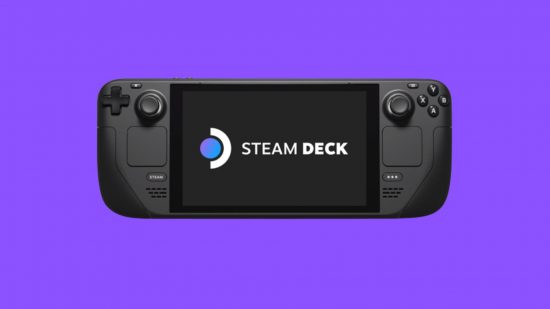 With surprisingly good controls, huge amounts of freedom in the games you can choose from, and more than enough power for the majority of games out there, it is excellent. Downsides? Some games won’t work straight out of the box, and either require a little bit of tweaking on your end or the developer’s end.

With enough time, these issues could be fixed, and the Steam Deck could be the de facto leader in the handheld space (maybe if it’s a tad smaller, too – it’s a bit too big for our liking right now).

Read the Steam Deck review from our sister site PCGamesN. 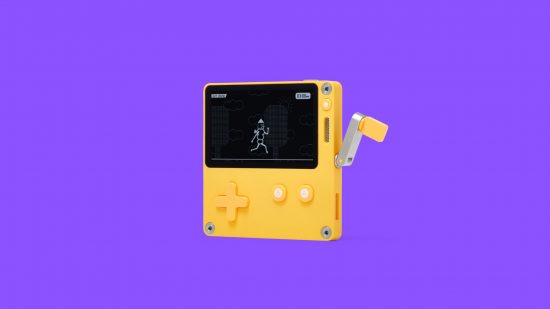 The best handheld gaming console for unique indie games is the Playdate. It costs $179 (around £130), and it’s set to be available from early 2023 at the time of writing.

In our Playdate review, we call it a “bright yellow embodiment of the joy of playing and indie gaming spirit.” There’s little else to sum it up than that, really. The Playdate is a tiny handheld with buttons on the face and a crank handle on the side.

This crank has led to many inventive gaming experiences, and the console makers drew in many great indie devs to contribute, like the minds behind Cursed to Golf, Chuhai Labs, Bennet Foddy of Getting Over It fame, or Return of the Obra Dinn creator Lucas Pope.

Sure, it’s an incredibly limited console, but with a roster of devs that good, it’s definitely worth a try. And look how cute and creative it is! To us, it’s one of the best handheld game consoles just for its inventiveness. 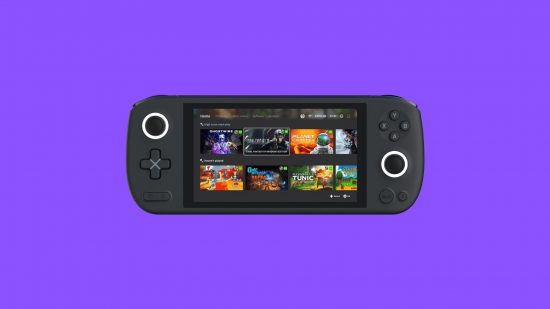 The best handheld gaming console with a small form factor is the Ayaneo Air. It starts between $569 (around £490) and can scale all the way up to $1249 (around £1100) depending on the configuration you go for.

The Ayaneo Air is tiny. What’s more, it’s also surprisingly powerful given its form factor. It’s a console packed with features too, with hall effect joysticks (meaning no drift!) with RGB light rings under them, an OLED screen, and expandable storage. It’s one of the best handheld gaming consoles if you’re short on space.

There are some issues, however. With less power than others on the market, it can occasionally limit you. The Aya Space operating system could also do with a bit of polish, while if you turn the TDP up this little thing can get big hot.

These are the sacrifices you make, however, to have such a tiny and powerful portable gaming console. And, if you can stomach the price, this device doesn’t have any competition in the ultra-small handheld PC market.

Keep up to date with the Ayaneo 2 release date for all the latest on the company’s next handheld. 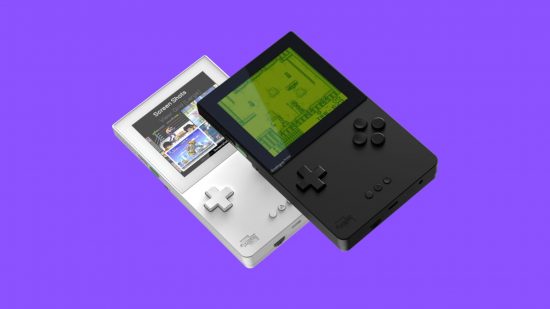 The best handheld gaming console for retro games is the Analogue Pocket. Expect to pay around $219 (around £190), though there are long waits for delivery.

The Analogue Pocket is the perfect version of the Game Boy, with a better screen, materials, and buttons, and a wider array of games to choose from. Whether it’s Game Boy, Game Boy Color, or Game Boy Advance, your Nintendo needs are covered.

It doesn’t stop there, though. If you have an adapter you can play Sega Game Gear, Neo Geo Pocket/Color, Atari Lynx, and TurboGrafx-16 games too.

All of this is without any emulation, which is exceptional. Downsides? It’s somewhat expensive, but I bet you it’s worth it to any diehard retro game player. 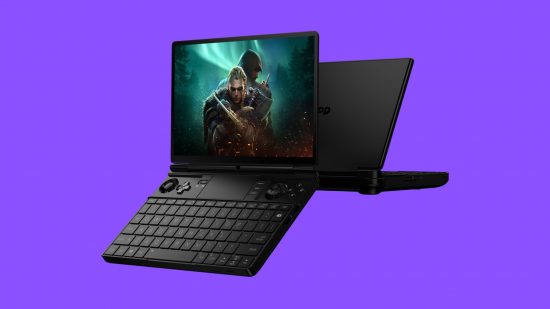 Oh no, that photo above isn’t wrong, friends. This is one of the best handheld gaming consoles, I promise, but it also doubles as a tiny little laptop. With a full keyboard below your standard gaming controller setup, the GPD Win Max 2 is a little odd at first, but looks can be deceiving – this thing is an excellent gaming machine.

Once you’re all done playing games though, what if you need to pause and write up a list of the best portable gaming consoles? Well, you can, as, with a lovely keyboard at your disposal, the GPD Win Max 2 is also great for on-the-go work-doing.

Downsides? The built-in controller is a little clunky due to positioning, though you may be surprised – it’s still comfier than it has any right to be. Oh, and it’s one of the most expensive devices on this list. 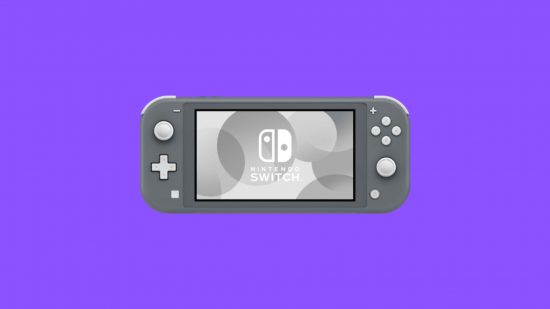 The best handheld gaming console below $200 the Nintendo Switch Lite. Expect to pay $198 / £190 unless you find a good deal or bundle.

For $200, the Nintendo Switch Lite is incredible value to anybody looking to get into portable gaming but not break the bank. With exactly the same library as its bigger brother, the Lite is great for bedtime games or if there are any kids in the house you don’t want breaking a half-a-grand Steam Deck.

It also comes in a great range of colours (blue, pink, yellow, grey, plus a bunch of special editions) and has decent buttons for such a little thing, making it one of the best handheld gaming consoles on a budget.

Downsides? The screen is small and a bit fuzzy compared to others on the market, and you can’t connect the Nintendo Switch Lite to the television. But still, for portable gaming on a budget, this is the way to go. 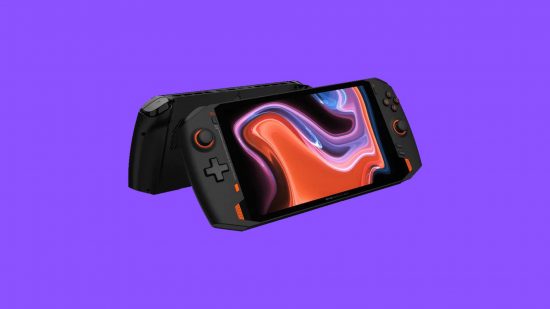 Do you really hate Valve for some reason? Do you want to spend more money on a handheld PC? Do you really, really need an Intel CPU? Well, buddy, have I got the best handheld gaming console for you.

In all seriousness, if you want a more traditional control scheme and more ergonomic design overall, the OneXPlayer is a good Steam Deck alternative. While it isn’t as powerful on the GPU side, it’s incredibly close in terms of performance.

Still, it has some OS issues and isn’t the same polished product the Steam Deck is overall. If you need it, however, it’s there (for almost twice the price!).

There you have it, folks, the best portable gaming consoles on the market today. We’ll update this list as we get our hands on new consoles like the Ayaneo 2, so be sure to check back. For more, check out our massive Skyrim marriage guide or even bigger Civilisation VI tier list if you’re planning to play either of these classics on your next portable console.