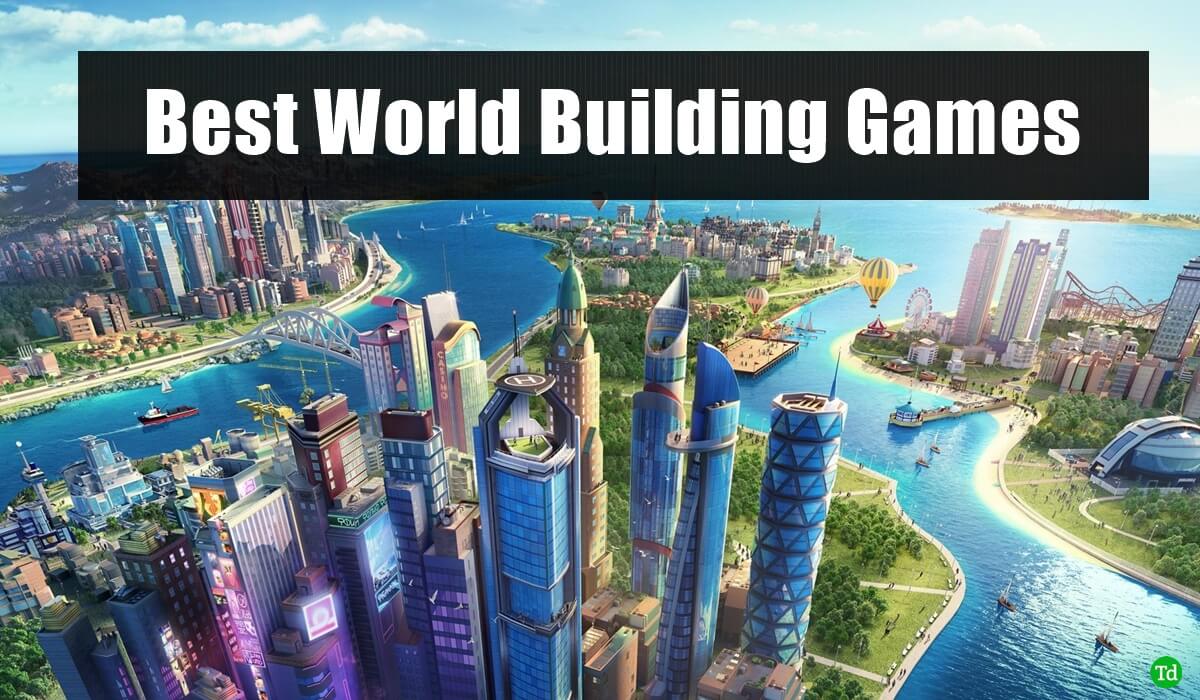 Playing games on your mobile or computer is one of the most immersive experiences you can get. It is always fun, and time just flies by. There are a lot of games, and world-building games are one of the popular ones.

Since there are a lot of world-building games available for all platforms, it is always challenging to find the best ones. So we have decided to make it simple for you.

This guide has compiled a list of the best world building games and apps. These games range from the medieval period to the post-apocalyptic world. So you are going to love them.

SimCity BuildIt is easily one of the best world-building games out there. It is pretty popular and has a large user base.

Here, you start a city literally from scratch. You design the roadmap, buildings, etc. As you progress further in the game, you can unlock your residents’ new facilities like water, electricity, etc.

Furthermore, you can also join clubs to progress more and even engage in trade with other cities. Then there are some other side missions in the game as well. Overall, it is pretty entertaining, and you will love it.

Next up on the list is Townsmen, and this is a super fun world-building game set in the medieval era. The concept is simple, you start with a small village and then develop it.

The goal is to develop it and lure more villagers to your area so that you can ultimately make an enormous empire.

Since it is set in the medieval period, there are not a lot of advanced technologies that you can use. So you have to rely on the old methods.

Then there are random events like invasions and natural disasters that require a coping strategy. Overall, this is an exciting game with a lot of fun.

Megapolis is one of the most popular world-building games available right now. It is filled with thrilling experiences and fun elements. You can create the urban infrastructure of your dreams in this game.

You can create airports, seaports, service buildings, and underground networks! The mines in the game are great as they allow you to harvest natural resources and sell them to other cities. So make sure to try it!

4. The Battle of Polytopia

This is a civilization-style world-building game that resembles a lot of the popular game Age of Empires. To start, you must choose a tribe and then a city on the map. The goal is to play more as you get more opportunities then.

In the beginning, you will have limited resources, but you can get more by making discoveries and hunting. Overall, this is a sweet and exciting game to play.

Next up on the list is Banished, and it is one of the unique ones. The game is set in the medieval period, and it tests your ability to survive in challenging conditions.

Talking about the premise, you are a small group of exiles who were thrown out. Now you have to build your path and community from scratch.

In this game, you just have one primary resource: the townspeople. Just like regular people, these people can fall sick, grow old, and eventually die. So you just have to create an optimum environment for them.

Anno 2070 from Ubisoft will be a fun addition to the library for those who love strategy games. The game is set in the future, and it’s not what you think.

The rising levels of oceans have caused major floods, and the entire world has fallen. Just a few highlands have survived this, and players have the chance to rebuild them and restore life.

This game has everything you need: deep gameplay, strategy to manage infrastructure, and fighting wars. All the elements keep you engaged all the time, and the ultimate goal of the game is survival. So it is a fun one to try.

City Mania is a world-building game by the famous game developer Gameloft. The whole premise of the game is relatively modern, and it comes with all the new technology.

Like many other games on the list, you can unlock new features, including various elements and industries from commerce to education and entertainment, as you progress further.

As a player, you get a lot of freedom over how your city will look as you have control over many things. This game also focuses on character details; as a result, you get many fun characters in-game. So make sure that you try it.

For people seeking a different world-building experience, Fallout Shelter is one of the best options. While many games on the list let you build your city from scratch, Fallout Shelter takes you into a post-apocalyptic world. Here, you have to build your vault to protect the population.

Just like other city-building games, you have to progress in the game to unlock new facilities for the population in the vault. The members of the vault can also be trained to help you.

The game allows you to send a dweller to take a look outside and bring you new stuff to make things interesting. But it is your responsibility to keep the dweller safe.