Tower of Fantasy’s Cocoritter is an out-and-out cutie, both in design and personality. This sweet gal wants nothing more than to ensure the safety and wellbeing of all those around her, and, though her naivety may be a little worrisome, her determination is completely admirable.

In this Tower of Fantasy Cocoritter build guide, we go into detail about her powerful healing staff, Absolute Zero, including its skills and attacks, advancement bonuses, upgrade materials, and more. We also take a closer look at Cocoritter herself, including her banner, favourite gifts, voice actor, awakening, and more. So, what are you waiting for? Let’s get healing and shaking.

Who is Tower of Fantasy’s Cocoritter?

Cocoritter is a kind and caring girl, whose unconditional trust in everyone can be a concern to those around her. Her sweet, innocent disposition goes hand in hand with her great determination to help others with her healing talents.

Cocoritter is an SSR Simulacra who wields a frost staff called Absolute Zero, capable of healing herself and allies. 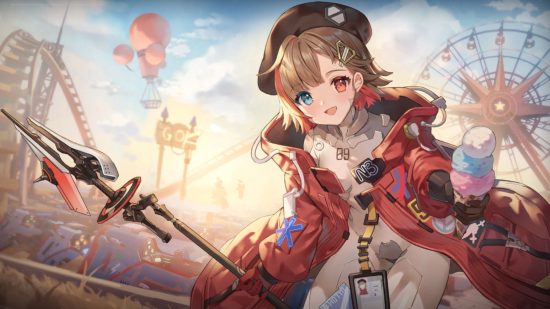 What is Tower of Fantasy Cocoritter’s banner?

Cocoritter and her weapon, Absolute Zero, is one of the SSR Simulacra always available on all weapon banners. This means you can pull her on the Weapons Galore black and gold nucleus banners, or on the limited banner if you don’t pull the featured weapon.

Cocoritter is first and foremost a healer. Her weapon, Absolute Zero, has a kit focused on healing and supporting both you and your allies, resulting in her being recognised as the strongest pure healer in both solo and multiplayer gameplay. She also doesn’t require advancement in order to unlock her powerful healing skills, though getting her to rank one provides you with a super helpful passive healing skill.

At three stars, Cocoritter also gets the sanctuary skill, which removes debuffs and increases the shatter rate and attack of herself and her allies, which is a great asset to any team.

Aside from her amazing support skills, Cocoritter has a brilliant weapon charge rate, helping you unleash your discharge skills more frequently, She can also apply frost damage over time, slows, and can control enemies with her combos, making her a wonderful unity for support and utility.

What are Tower of Fantasy Cocoritter’s weapon stats?

Here, we list all the main stats for Cocoritter’s weapon, Absolute Zero. These are the weapon’s base stats before you level it up or equip it with any matrices.

The shatter ranking dictates how quickly Absolute Zero can break enemy shields, whereas the charge rate shows how quickly the weapon gains charge. 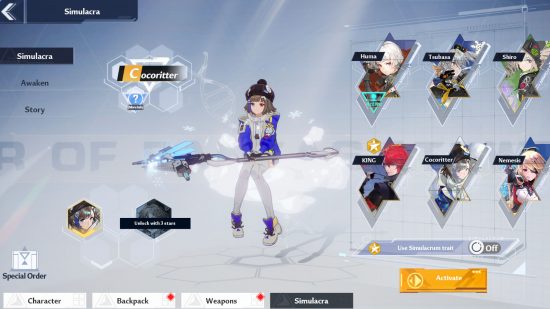 What are Tower of Fantasy Cocoritter’s attacks and skills?

Here are each of Tower of Fantasy Cocoritter’s skills and attacks. Note that this is based on Absolute Zero’s level one stats, which increase as you level up the weapon. 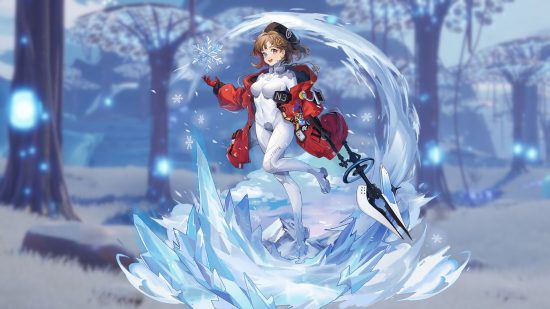 You can advance Tower of Fantasy weapons by using their corresponding fusion cores, which you get by collecting more than one copy of a character. After you get your first copy of Cocoritter and her Absolute Zero staff, you can purchase another copy through the Commissary’s weapon store for 120 black gold. Alternatively, you can get a duplicate of Cocoritter by pulling on the banner, but, of course, this is entirely up to RNG.

Advancing your weapons by spending fusion cores and gold unlocks special bonuses. Here are all of the bonuses you gain from unlocking each of Cocoritter’s advancement stars.

All Simulacra have their own dedicated matrix set, and Cocoritter is no different. Hers is a brilliant set for increasing your healing and buffing both your and your allies’ attack. However, as it’s an SSR set, it can be a little tricky to get your hands on. Luckily, SR Pepper’s matrices are also a great choice, and you can get the entire set by completing chapter seven of your wanderer’s adventure book.

If you’re looking for an R-rank option, you should go with the Functional Dash set to nab a small frost damage boost. Check out our Tower of Fantasy matrices guide for more info. 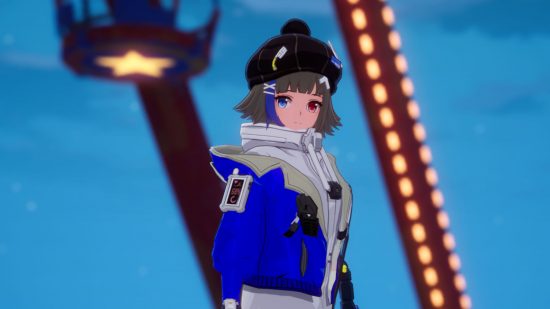 What are Tower of Fantasy Cocoritter’s upgrade materials?

When upgrading Cocoritter, you need icecore and heart of winter elemental ores, acidproof glazes, and nanofiber frames. You can get boxes containing acidproof glaze and booster frames as rewards from Dimensional Trials, Interstellar Exploration, Omnium Beacons, and the weapon store. You can find icecore while out exploring, or by using elemental ore boxes. For more help locating materials, check out our Tower of Fantasy map guide.

What are the best Tower of Fantasy Cocoritter team comps?

To be a strong healer, you realistically need two healer-type weapons on your team to reap the rewards of the benediction buff. As such, we recommend pairing Cocoritter with Tower of Fantasy’s Zero for a more defensive build, or Tower of Fantasy’s Nemesis for and offensive approach. Alternatively, you could pair her with both Zero and Nemesis for a well-sustained PVP lineup that can help you out-survive your opponent with ease.

Another strong PVP team sees Cocoritter paired with Nemesis and Tower of Fantasy’s Meryl – a lineup that is currently considered meta. Meryl offers amazing damage, shield breaking, and crowd control resist, Nemesis dishes out ranged damage and heals, while Cocoritter ensures your health stays in top shape, charges your other weapons, and offers some crowd control and freeze options.

Alternatively, for a good general-purpose team, you can put Cocoritter and Zero with Tower of Fantasy’s Shiro, who can help slow enemies and shred their shields from a distance.

What are the best Tower of Fantasy Cocoritter gifts?

When picking out gifts for Cocoritter, keep in mind that she loves toys, decorations, and rare items. For more information, head over to our Tower of Fantasy gift guide.

What are Tower of Fantasy Cocoritter’s awakening rewards?

Keep in mind that you can use a Simulacra’s trait without taking on their appearance by toggling the ‘use Simulacra trait’ button in the Simulacra selection screen. 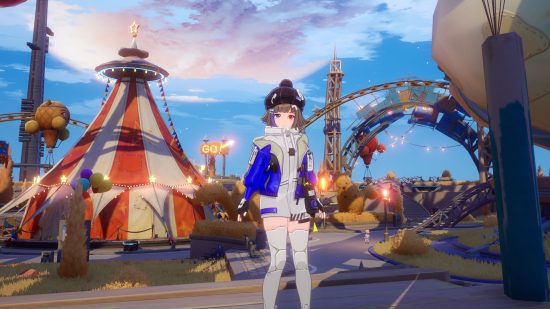 Who is Tower of Fantasy Cocoritter’s voice actor?

Cocoritter’s Japanese voice actor is Kito Akari, who you may recognise as Genshin Impact’s Barbara, Maria Valkyrie from Valkyries Elysium, Aiba from AI: The Comnium Files, Elsje from Rune Factory 5, Nesuko Kamado from Demon Slayer, and many other roles.