As the first and only hammer-wielder currently in the game, Tower of Fantasy’s Ene is always ready to smash through the opposition with her huge frost hammer, Pummeler. Though she may look small and sweet, with her fluffy little cat ears and translucent tummy, she can sure pack a punch and makes a great addition to any tank team.

If you want to get this adorable droid on your side and harness the power of the Pummeler, you’re in the right place. In this Tower of Fantasy Ene build guide, we dive into all of her attacks, skills, advancement stars, and more, along with her top team comps and the best matrices to equip her with. Don’t underestimate her – she means business!

Who is Tower of Fantasy’s Ene?

Back in the era of the Old Federation, a private military contractor known as Victoria had plans to develop a series of elite battle droids – and Ene was their prototype. Intending to make the ‘perfect droid’ that was self-aware, independent, able to think, and capable of acting like a real human, the executive of the program uploaded a backup of his deceased daughter’s consciousness into Ene to act as her ‘soul’. She was later granted the right to live as a human.

Ene is an SR Simulacra who wields an ice hammer called Pummeler. 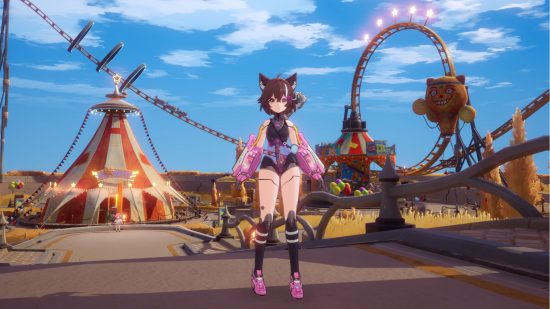 What is Tower of Fantasy Ene’s banner?

Ene is an SR simulacra available on any of the limited or standard weapon banners. You’re guaranteed to get one SR weapon every ten pulls, so it shouldn’t take long for you to gather at least one or two copies of Ene and her Pummeler.

For more info about drop rates, currencies, and more, check out our Tower of Fantasy banners guide.

Though Ene is only an SR Simulacra and lands in the B rank of our Tower of Fantasy tier list, she’s still a worthy addition to your arsenal. She’s easy to acquire and has great shield-breaking capabilities, making her a good choice against shielded enemies and world bosses.

Her ice shell passive also freezes enemies with fully charged attacks, allowing you to disable and debuff your opponents with a few well-placed combos. Her tankiness also increases with her advancement stars, and, with so few defence weapons currently in the game, she’s a great asset to fortitude teams.

What are Tower of Fantasy Ene’s weapon stats?

Here, we list all the main stats for Ene’s weapon, Pummeler. These are the weapon’s base stats before you level it up or equip it with any matrices.

The shatter ranking dictates how quickly Pummeler can break enemy shields, whereas the charge rate shows how quickly the weapon gains charge. 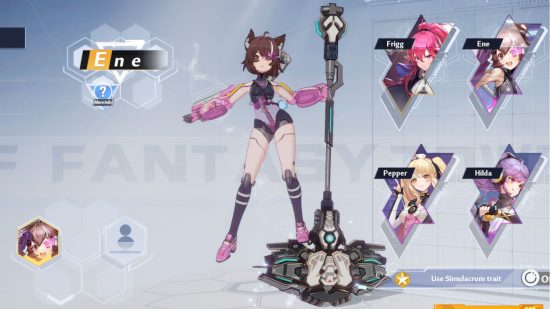 What are Tower of Fantasy Ene’s attacks and skills?

Here are each of Tower of Fantasy Ene’s skills and attacks. Note that this is based on Pummeler’s level one stats, which increase as you level up the weapon. 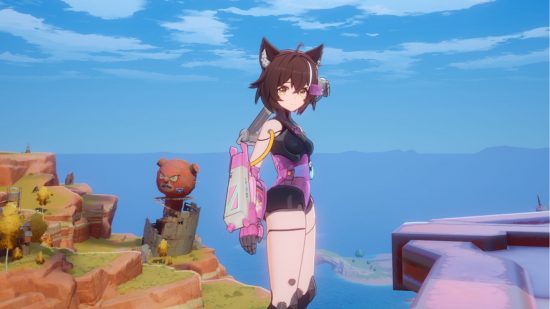 What are Tower of Fantasy Ene’s upgrade materials?

You can advance Tower of Fantasy weapons by using their corresponding fusion cores, which you get by collecting more than one copy of a character. After you get your first copy of Ene and her Pummeler, you can purchase another copy through the Commissary’s weapon store for 35 black gold. Alternatively, you can get a duplicate of Ene by pulling on the banner.

Advancing your weapons by spending fusion cores and gold unlocks special bonuses. Here are all of the bonuses you gain from unlocking each of Ene’s advancement stars.

Although Ene has her own set, she’s a rare exception where we recommend equipping her with different sets. The best choice for her is Huma’s set, which allows her dodge attacks to inflict bleed, and reduces the attack of nearby targets that are taking damage over time.

Alternatively, in a fortitude team comp, Ene benefits from Robarg’s matrix set, which poisons the target when Ene breaks its shield. Or, if you’re looking for an R-rank substitute while you’re waiting for something better, Functional Dash gives a small boost to Pummeler’s frost attack.

What are Tower of Fantasy Ene’s upgrade materials?

When upgrading Ene, you need icecore, acidproof glazes, and booster frames. You can get boxes containing acidproof glazes and booster frames as rewards from Dimensional Trials, Interstellar Exploration, Omnium Beacons, and the weapon store. You can find icecore while out exploring, or by using elemental ore boxes. For more help locating materials, check out our Tower of Fantasy map guide. 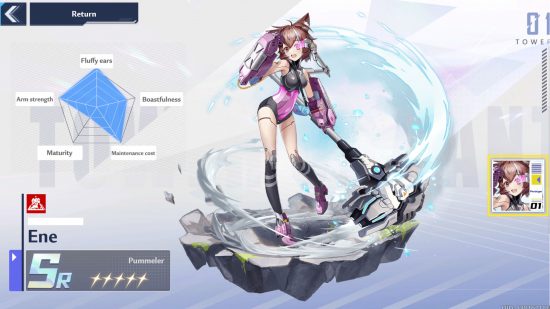 What are the best Tower of Fantasy Ene team comps?

Ene benefits most from the fortitude weapon resonance bonus and synergises well with Tower of Fantasy’s Meryl, who offers plenty of CC resist and further pushes your shield breaking capabilities. In the third spot we recommend using Tower of Fantasy’s Nemesis, who offers great healing for self-sustain and provides you with some more range.

What are the best Tower of Fantasy Ene gifts?

When picking out gifts for Ene, keep in mind that she loves rare items, saved items, and decorations. We’ve listed all her favourite gifts below, along with their rarity, the number of awakening points they give, and where to get them from. For more information, head over to our Tower of Fantasy gift guide. 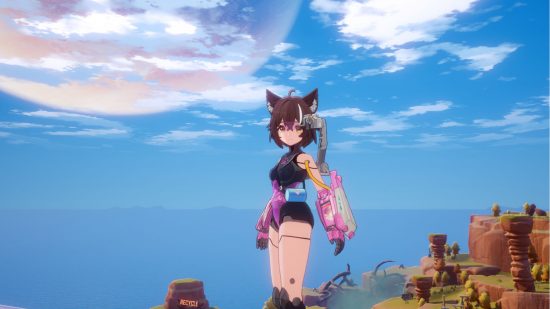 What are Tower of Fantasy Ene’s awakening rewards?

Keep in mind that you can use a Simulacra’s unlocked trait without taking on their appearance by toggling the ‘use Simulacra trait’ switch underneath them on the Simulacra selection page.

That’s it for our Tower of Fantasy Ene build guide. If you want to explore a whole new world, head over to our Disney Dreamlight Valley realms guide.