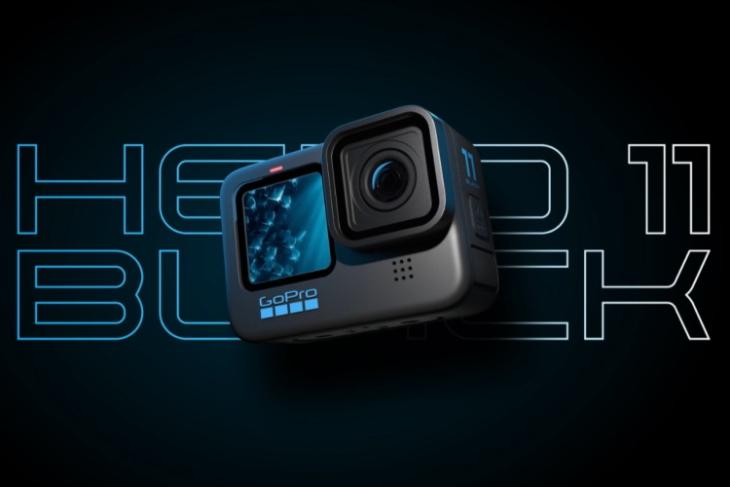 Starting with the design, not much has changed on this front, and the GoPro Hero 11 Black looks the same with dual screens — one on the front and another on the rear to serve as the viewfinder. What’s new here is the camera sensor. The Hero 11 Black now comes with a taller 1/1.9-inch sensor, which enables you to capture 27MP photos (up from 23MP on the Hero 10 Black).

Not just that, the sensor captures content in an 8:7 aspect ratio at 5.3K, which is the largest FOV ever on a GoPro camera. Now, if you capture videos in this aspect ratio, you can edit them to an aspect ratio that fits your needs via the company’s Quik app on the move. The larger new sensor also enables the Hero 11 Black to capture photos and videos in 10-bit color, which is amazing.

Now, before we explore some of the awesome new features onboard, the maximum resolution that a Hero 11 Black can capture is 5.3K @ 60FPS and 4K @ 120FPS. The company’s SuperView mode (widest FOV) is also supported for both resolutions. But the camera now also comes with a superior version of this feature called HyperView, which takes the whole 8:7 sensor readout and creates a 16:9 output.

If you’re a fan of GoPro’s HyperSmooth stabilization feature, well, you get an improved 5th-generation iteration of the same here. This is coupled with a 360-degree horizon lock feature, which works up to 5.3K @ 30FPS. It helps you keep the subject leveled with respect to a specific horizon point.

Under the hood, there aren’t any major changes. The GoPro Hero 11 Pro comes with the same GP2 processor as its predecessor from last year. The standard battery, however, has been replaced with a removable 1,720mAh Li-ion Enduro battery. The Enduro battery was previously available as an accessory. The larger battery is accompanied by two video shooting modes — Highest Quality (no compromises on battery and quality front) and Extended Battery (lowers resolution and frame rate to increase capture length).

Moreover, the company is also launching a Hero 11 Black Creator’s Edition kit to enable you to turn your camera into a vlogging rig. Here, with the Hero 11 Black at its core, you get accessories like the Volta extended battery grip, Media Mod with a directional mic, and the Light Mod in a single package.

Yeah, as you can tell from the name and the pictures, there’s now a new “mini” version of the GoPro Hero camera, which sort of is a much-requested successor to the Session camera. The Hero 11 Black Mini is not as small as the Session, measuring 52.4 x 51.2 x 38mm. Plus, the camera is pocketable and weighs only 133 grams.

A unique feature of the Hero 11 Black Mini has to be the dual mounting fingers. What does this mean for GoPro users? Well, you’ll now have mounting fingers on the rear and back, which will enable you to easily mount this camera on more things like helmets, bodysuits, and within cars. This adds versatility to the Hero 11 Mini’s arsenal.

Next up, it’s difficult to miss the fact that Hero 11 Mini does not have any touch displays – none on the front or even the back. You only have a tiny display at the top, next to the shutter button, to show the video capture mode, battery life, and other useful info. There’s a pairing button on the front, next to the camera lens.

As for the camera sensor and internals, enthusiasts would be elated to know that you have the same 24.7MP sensor and 5.3K/60FPS video recording capabilities as the standard model on the Hero 11 Black Mini. The GP2 processor under the hood is also the same, along with the support for 1080p live streaming, waterproofing up to 10m, and the Max camera mod.

Compared to the standard model, the mini comes equipped with a non-removable 1,500mAh Enduro Li-ion battery. You will need to plug in the camera to charge it.