Don’t you think Genshin Impact’s Inazuma has been missing something lately? Maybe a little more mystery is in order? Well, sure, we’ve recently seen the gloomy depths of Enkanomiya, and the Bantan Sango Detective Agency always has something going on, but we’re talking about some real sleuthing. A true, rogue detective to add to the ranks. Wouldn’t that be great?

Well, good thing Genshin Impact’s Heizou might be here to save the day, then! Even if the people of Inazuma may not be too thrilled. While we still don’t know much about this mysterious, anemo-wielding sleuth, we’re sure to find out soon, as the Genshin Impact Heizou banner is on the horizon. Here’s everything we know so far.

If you’re hoping to have the best team to accompany you on your adventure, check out our Genshin Impact character and Genshin Impact next banner guides. We also have a list of Genshin Impact codes to snag you some freebies, and a rundown of all the latest Genshin Impact events to keep you busy while you wait for Heizou to come home.

When is Genshin Impact Heizou’s banner?

Heizou is very unique in that he’s the first melee catalyst user (and the first playable male catalyst user) in the game. He’s weilds an anemo vision, and takes down his enemies with powerful kicks and punches, fighting with a style reminiscent of the martial arts. He also deals more elemental damage to enemies affected by hydro, pyro, cryo, and electro.

What are Genshin Impact Heizou’s skills?

We’re not sure what the best weapon for Heizou is right now, especially as his playstyle is extremely unique when compared to other catalyst users. We’ll update this section when we find out more. 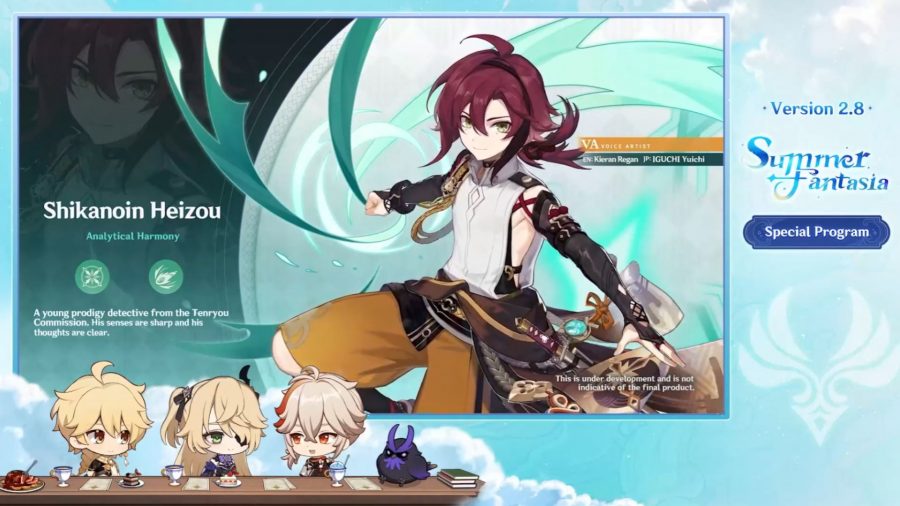 As with every other leak, this information is unconfirmed and may change prior to Haizu’s final release, but beta testers have leaked all the materials required to ascend Heizou and level up his talents here. If this is true, it looks like we’ll be back to bug hunting, in search of those elusive Onikabuto, and we’ll be facing off against the Ruin Serpent in the Chasm to get him in tip top fighting shape.

And that’s everything we’ve got on Genshin Impact’s Heizou for now, but we’ll be sure to keep our Inazuman detective hats at the ready and update this guide whenever we find something new.

For now, check out our Genshin Impact skins guide to ensure your characters are kitted out in style, and our list of the most artful Genshin Impact artifacts for that extra oomph.