To say you already have a big party in the new Xenoblade is an understatement, but with the fearsome forces of Moebius on your tail, you’re gonna need an even bigger roster of Xenoblade Chronicles 3 heroes. While the main six party members are your active companions that you can control and can combine into their Ouroboros forms, heroes are another wrinkle to the battle system.

So, what are Xenoblade Chronicles 3 heroes? A seventh wheel, or another pillar of combat, heroes are people you meet along your journey who decide to lend their aid to your party. They take part in battles and, upon joining, unlock one of the many classes for your party members. You can only use one hero at a time in the complexities of Xenoblade Chronicles 3 combat, but you can swap them out as you see fit to make sure you use the right one for each battle.

All XC3 heroes offer up a fresh class. If you’re interested in what they entail, check out our Xenoblade Chronicles 3 classes. Also, beware that there are light spoilers ahead. They’re tiny, but you’ve been warned. 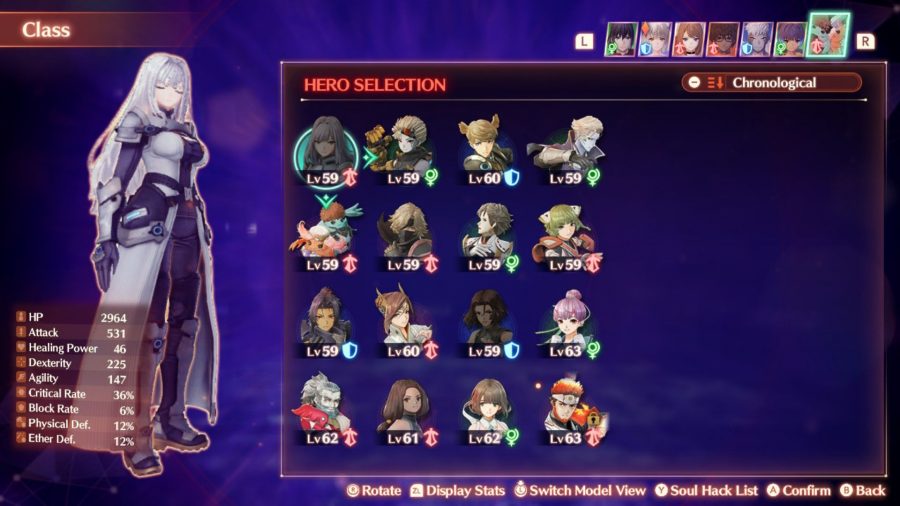 Ethel is the leader of a colony who once saved the party’s life. She has a significant place in Xenoblade Chronicles 3’s story, so I’m not going to say too much. She’s a fearsome warrior, wielding two swords and taking down foes in short, vicious bouts. She doesn’t really have a hero quest to complete on the side, as it’s part of the main story. 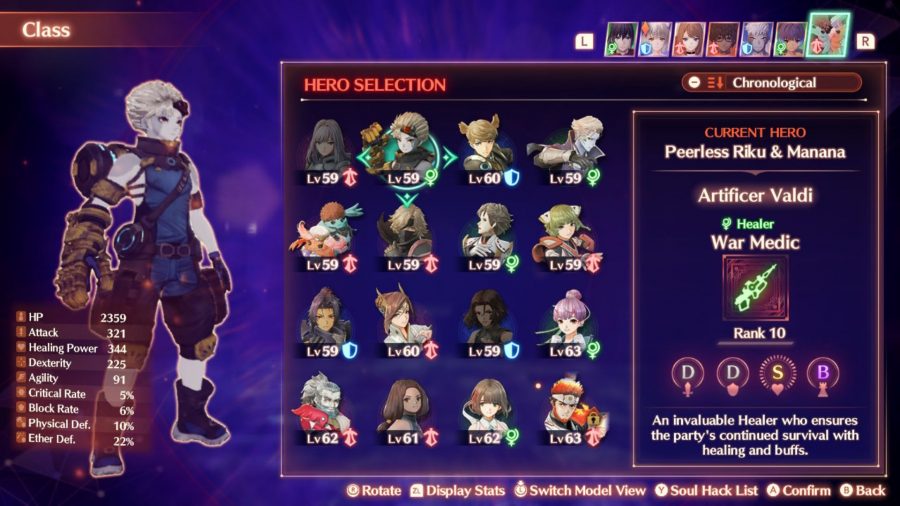 Valdi is a child. Yet he commands a colony? I know, weird. He’s also obsessed with repairing junk, finding spare parts leftover from a battle and constructing them into something new. He’s a real sweetie but doesn’t have the best leadership skills, so defaults to his second in command for most logistical decisions. He’s a super useful XC3 hero, however. 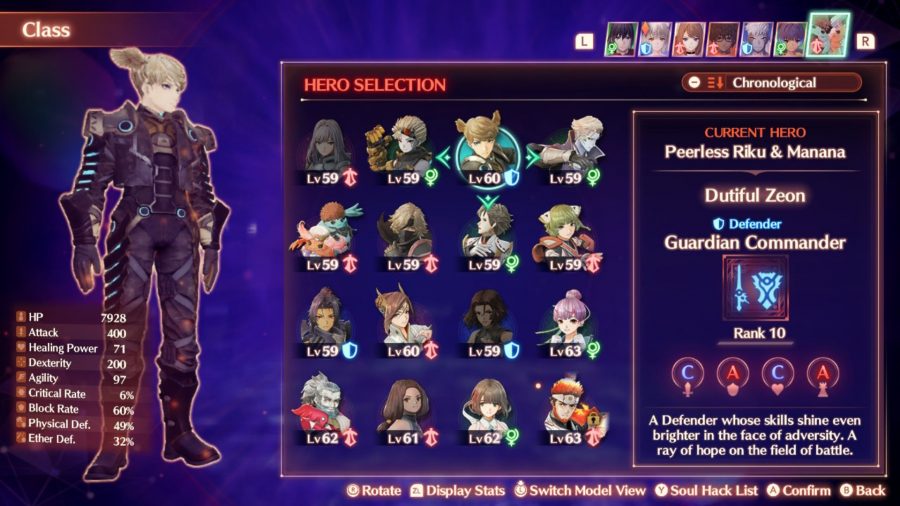 Dutiful Zeon is a good friend of Noah, though not at first, of course, after he and his friends were marked as Ouroboros. He’s a defender with a bevy of skills best used during really tough battles, making him a great XC3 hero in a tight spot. His class is described as “a ray of hope on the field of battle”, which is just lovely, isn’t it? 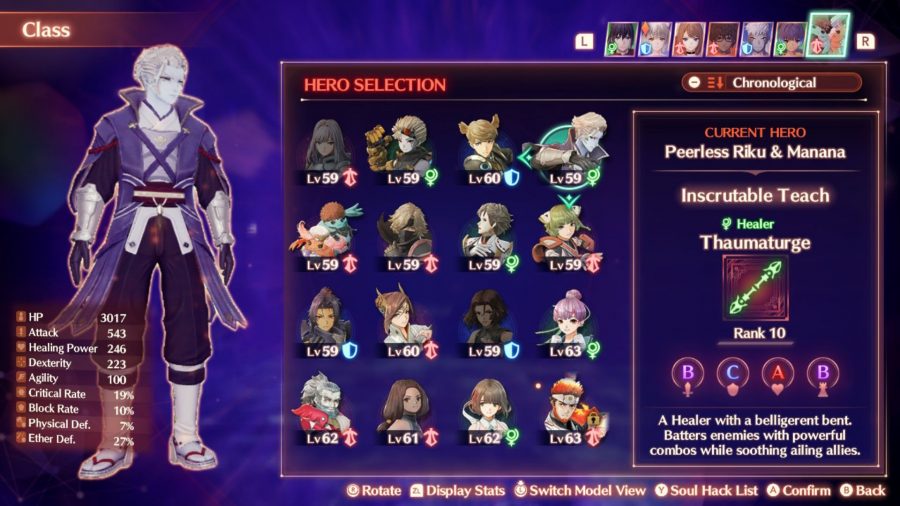 Mio and co’s colony leader, the inscrutable Teach is a varied and skilful warrior with a stoic demeanour. He wields a flexible staff, almost like a thick whip (gross) in his role as a Thaumaturge, a healer with a belligerent bent, battering enemies with combos at the same time as keeping his team stocked up on health. 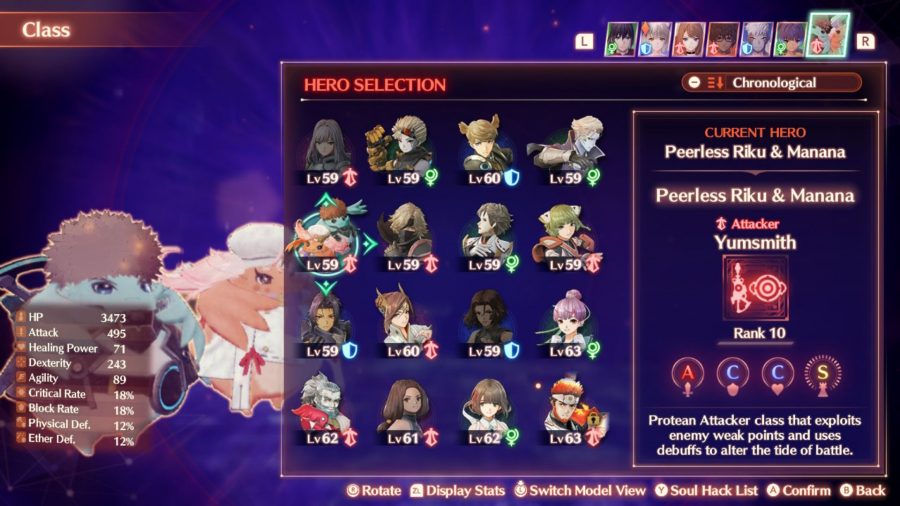 Riku & Manana are a Nopon pair who accompany you throughout Xenoblade Chronicles 3, the only XC3 hero to be more than one character. They also double up as yumsmiths, giving you the new adorable class for your characters to learn. It’s an attacking class, with good damage and great strategic use, exploiting enemies’ weak points and making use of debuffs. 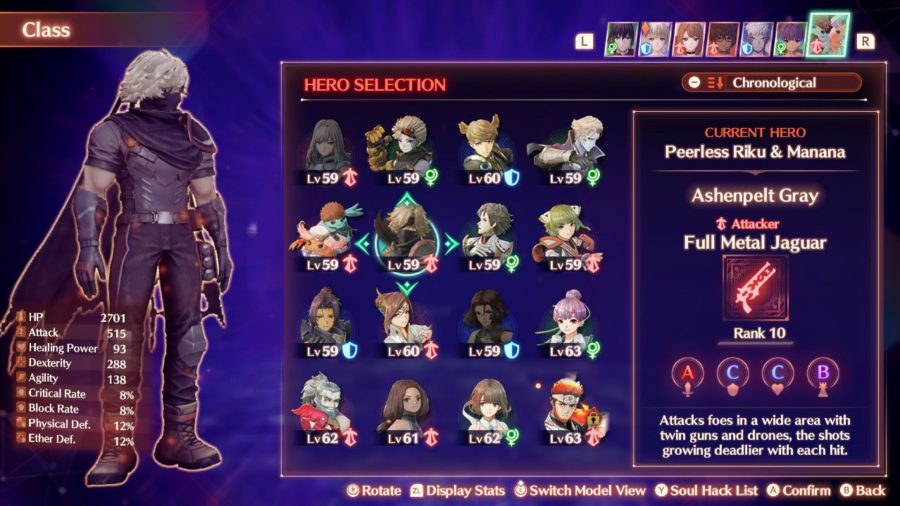 Ashenpelt Gray is a badass. A mask-wearing (as all badasses do when there’s a pandemic on), cape-donning, gun-wielding, scruffy-blonde-haired badass of an XC3 hero. He gives you the coolest class by far, full metal jaguar, which is a great all-rounder with a focus on attacking. They use two guns and drones, which is a wild combo in a game all about big red swords. 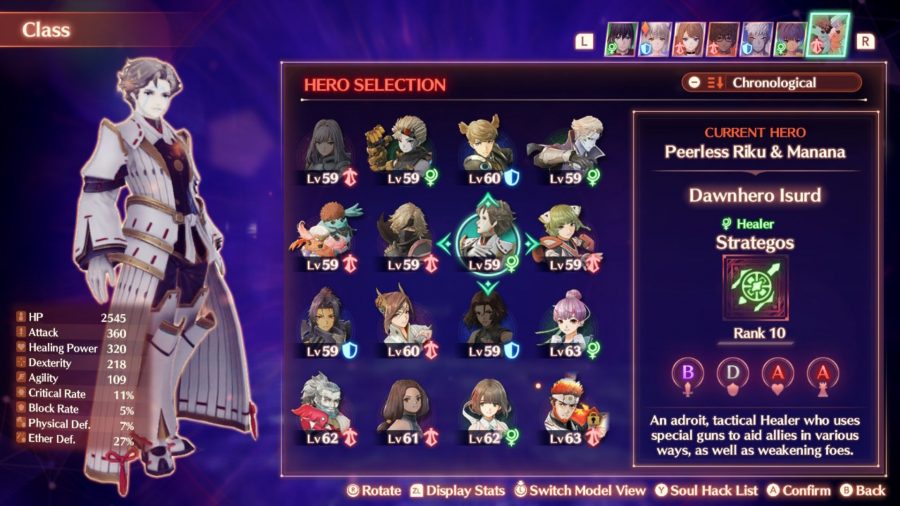 Isurd’s class is described as ‘an adroit, tactical healer who uses special guns to aid allies in various ways, as well as weakening foes.” So, not only did I learn a new word, but we also get one of the handiest classes around. His full title is dawnhero Isurd, too, just in case this game needed to be any cooler… 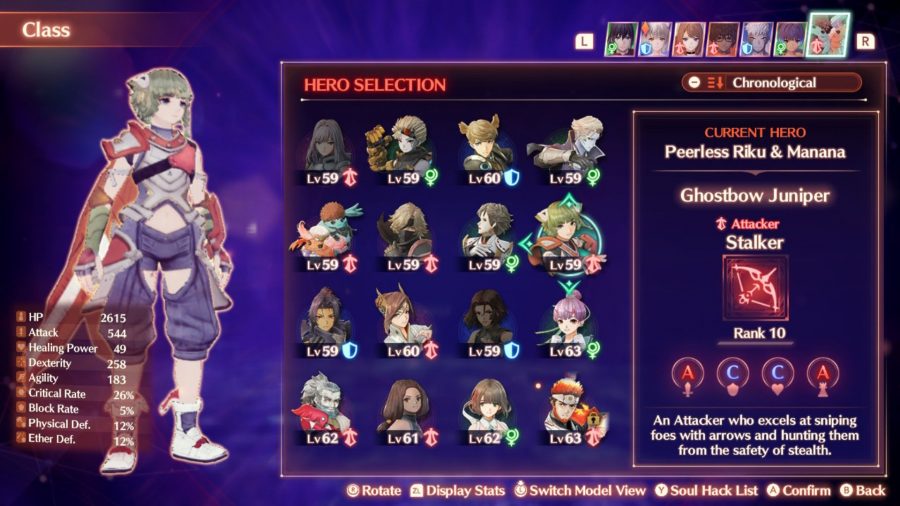 No, not that sort of stalker. Juniper is a stalker in the stealth sense, sniping enemies from a distance. They’re also leader of a forgotten colony, barely scraping by. Juniper’s quest is vital to the story, and easily one of my personal favourites. I heartily recommend everyone play it and make the most of this excellent XC3 hero. 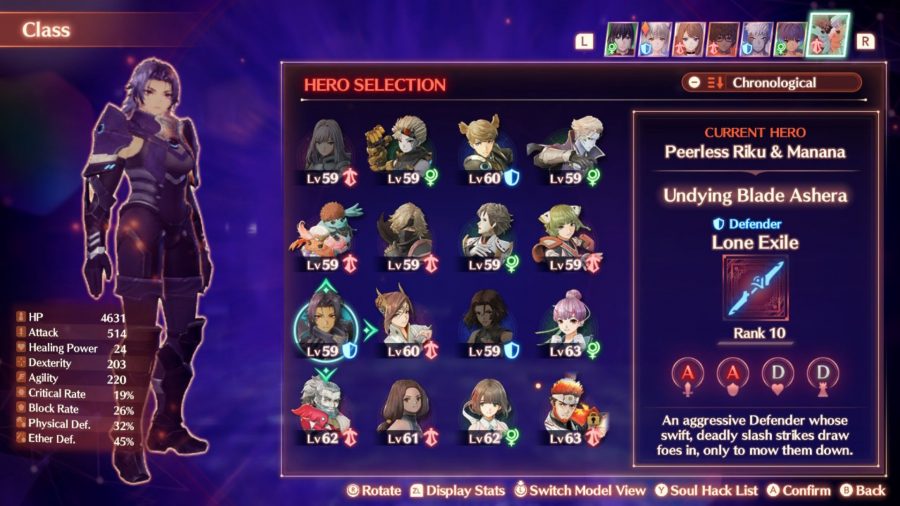 Ashera is frequently described as a ‘maniac’ by our party members, as she seems to have some sort of death wish, fighting her own colony to ensure they’re strong enough. She’s absolutely hilarious and my current personal favourite XC3 hero. She also unlocks the lone exile class, which wields a double blade like a Xeno version of Darth Maul. Heck yeah. 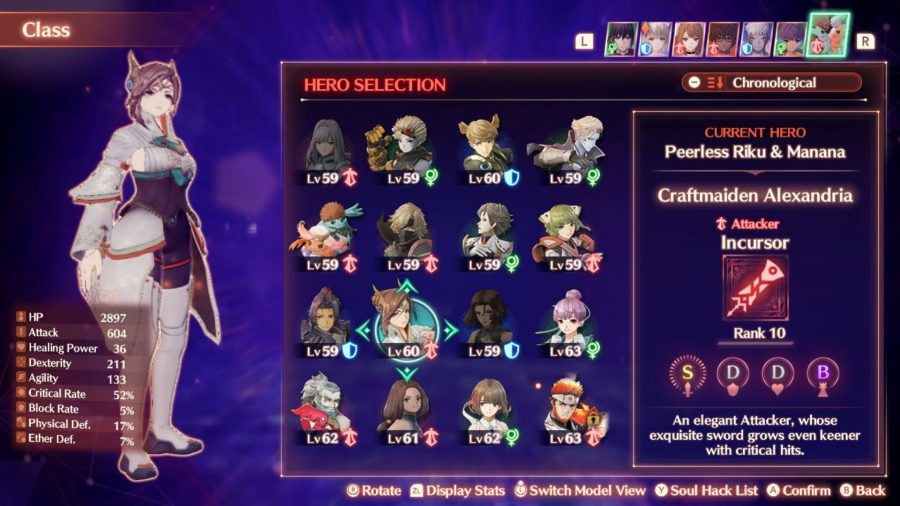 You can meet Alexandria pretty early on, but actually getting through her hero quest is going to require a lot of levelling up beforehand. It’s worth it though, as Alexandria is another charmer in the XC3 hero category, full of personality and style that makes the quests worth it. The incursor class is cool, if a bit too attack-focused. 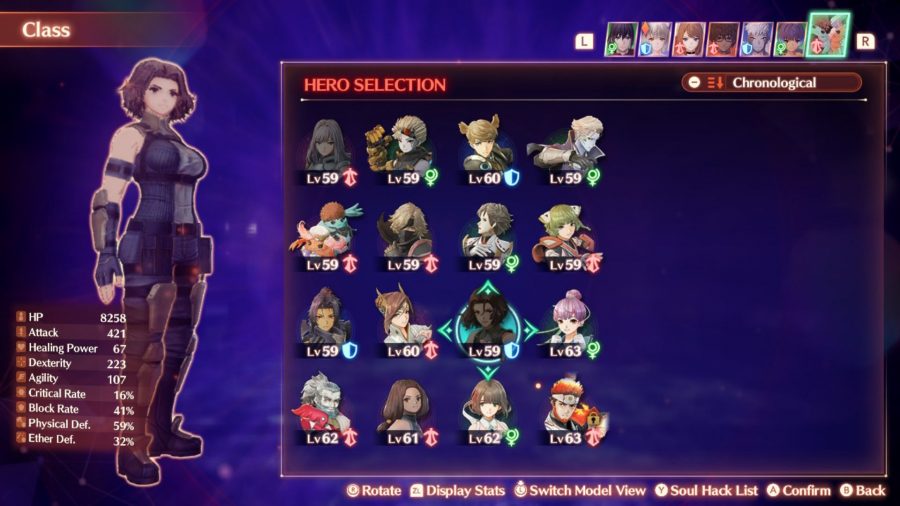 Monica is the leader of the city, which you won’t actually reach until around 40 or 50 hours of gameplay time, so I ain’t gonna say nothin’! Their class is the lost vanguard, “a stout defender guarding allies all around with shield and arts, while crushing foes with a mace.” That’s all I’m saying for now, my lips are sealed. 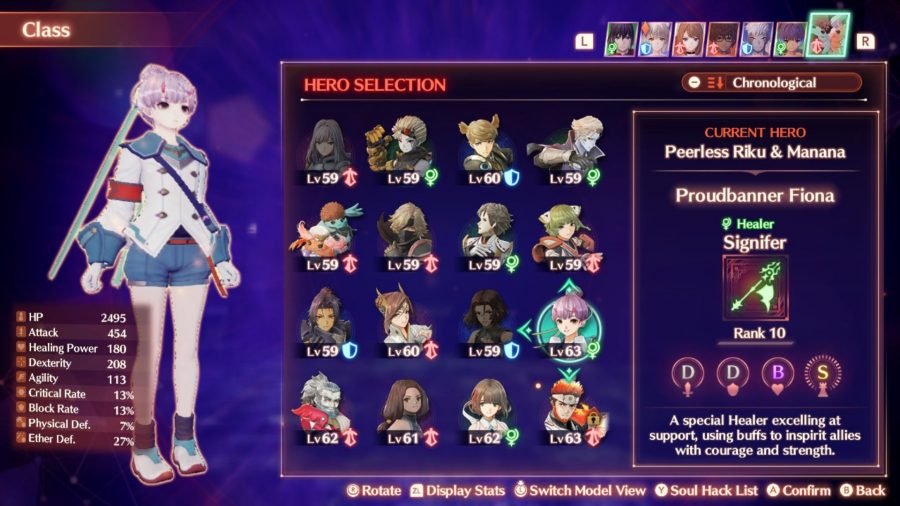 Fiona is the leader of a colony full of Scottish people. There’s one Scottish lass who sounds like they’ve sucked up a load of helium, and I hate it. But other than that, she’s a pretty cool XC3 hero, and her signifer class can bag your party loads of buffs, even if it has little use outside of that. 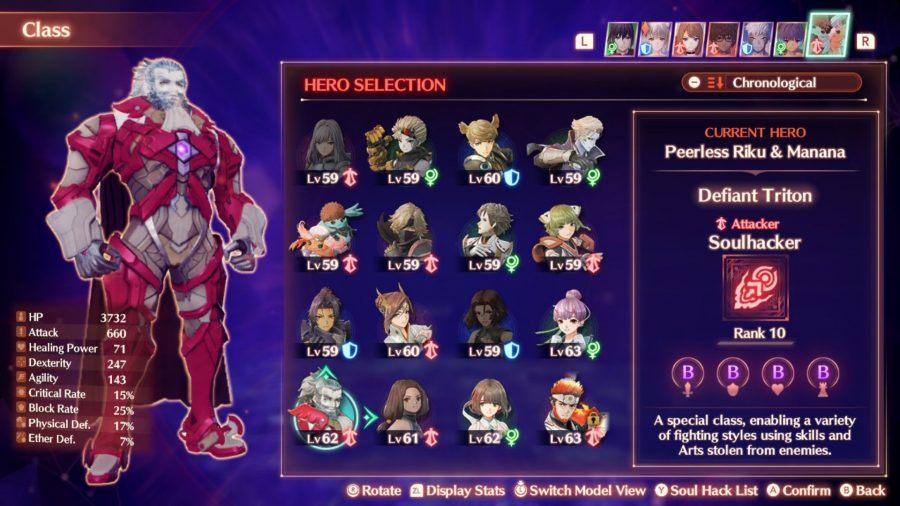 Defiant Triton is a unique XC3 hero inasmuch as their class, the soulhacker, only has one master skill and one master art, as opposed to the usual two and three, respectively. Instead, they can steal arts from other enemies, making them work in a very different way in-game. Either way, they’re a proper ‘ahoy matey’ type of sailor, an ex-Moebius, and a hard-hitting fish-obsessed pugilist. Fist and fish-obsessed? That’s a lot. 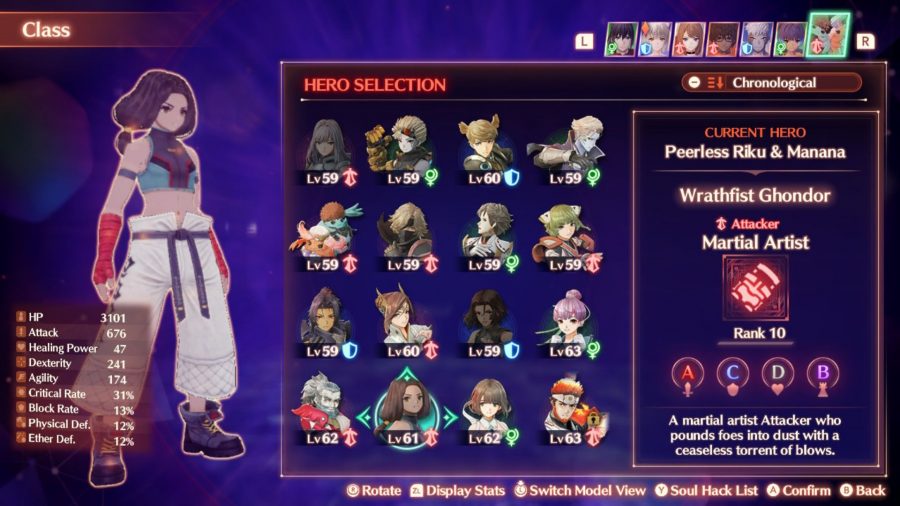 If you don’t love Ghondor, I’m not your friend. She’s Monica’s daughter, a fierce fighter, and constantly say words like ‘bitchqueen’. There’s one moment where she literally cries “look who’s back, bitches.” That’s excellent stuff. Oh, and her martial artists class has excellent attack and strategic possibilities. 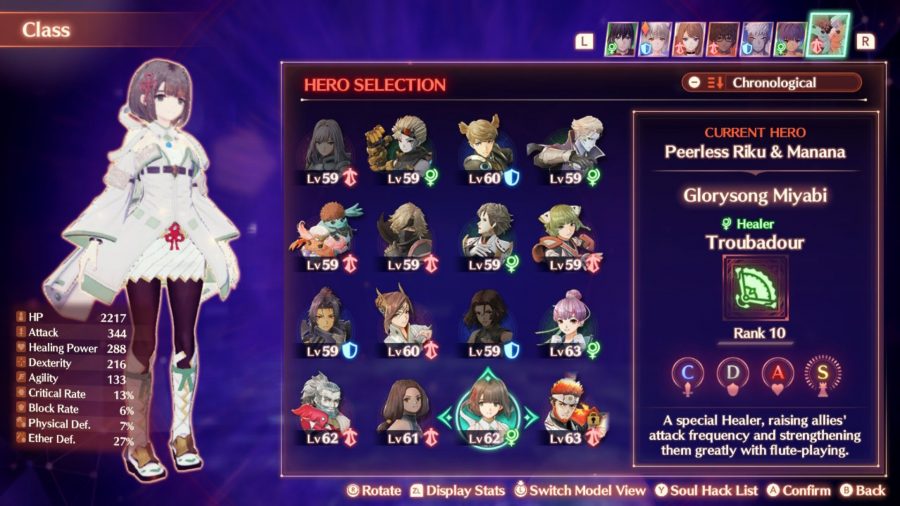 A troubadour is a wandering singer, and Miyabi is exactly that. She is a vital part of Mio’s backstory, so, as before, I’m zippin’ my lips. But her XC3 hero class is very interesting, with really good healing and strategic options, helping your arts charge more quickly, which can make a huge difference in battle. 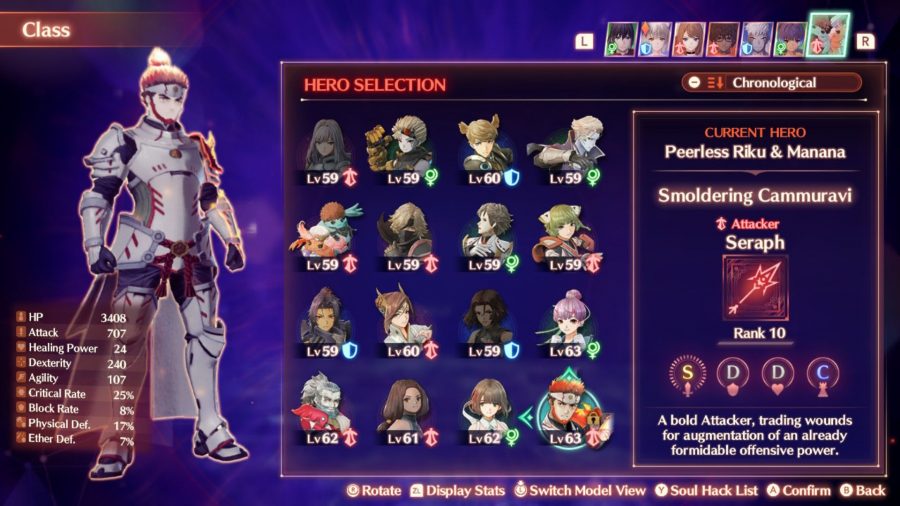 The seraph class is all out attack, ready to take damage but not too much. Meanwhile, Cammuravi is a legendary warrior, leader of a colony, and rival of Ethel. His story is way to spoilery for me to into any detail – pick up the game and see for yourself!

There’s one XC3 hero we’re yet to find, but we’ll update this page as soon as we do. We know their class is the machine assassin, but no more than that for now.