History is pretty cool, right? Thinking about what people just like us (except a few feet shorter) did a few thousand years ago is wild. Have you ever heard of a xylospongium? It’s terrifying, but people used it. What weirdos! That’s why history is pretty cool, and that translates into historical games.

The interesting thing about history games is that they can be translated into so many different genres. What we’ve got below is a wide variety of titles, from nitty-gritty strategy titles and big AAA blockbuster action games, all the way to quick and easy mobile titles and twisty, gripping tales. There’s so much to choose from.

So, go on, choose some! There are some stellar games out there, giving you a chance to explore the unexplorable. No need to read books anymore, thank god. For more top-tier titles, check out our best Mario games guide or our best open-world games guide for some new worlds to get lost in.

Anyway, let’s get down to (old) business…

The best historical games on Switch and mobile 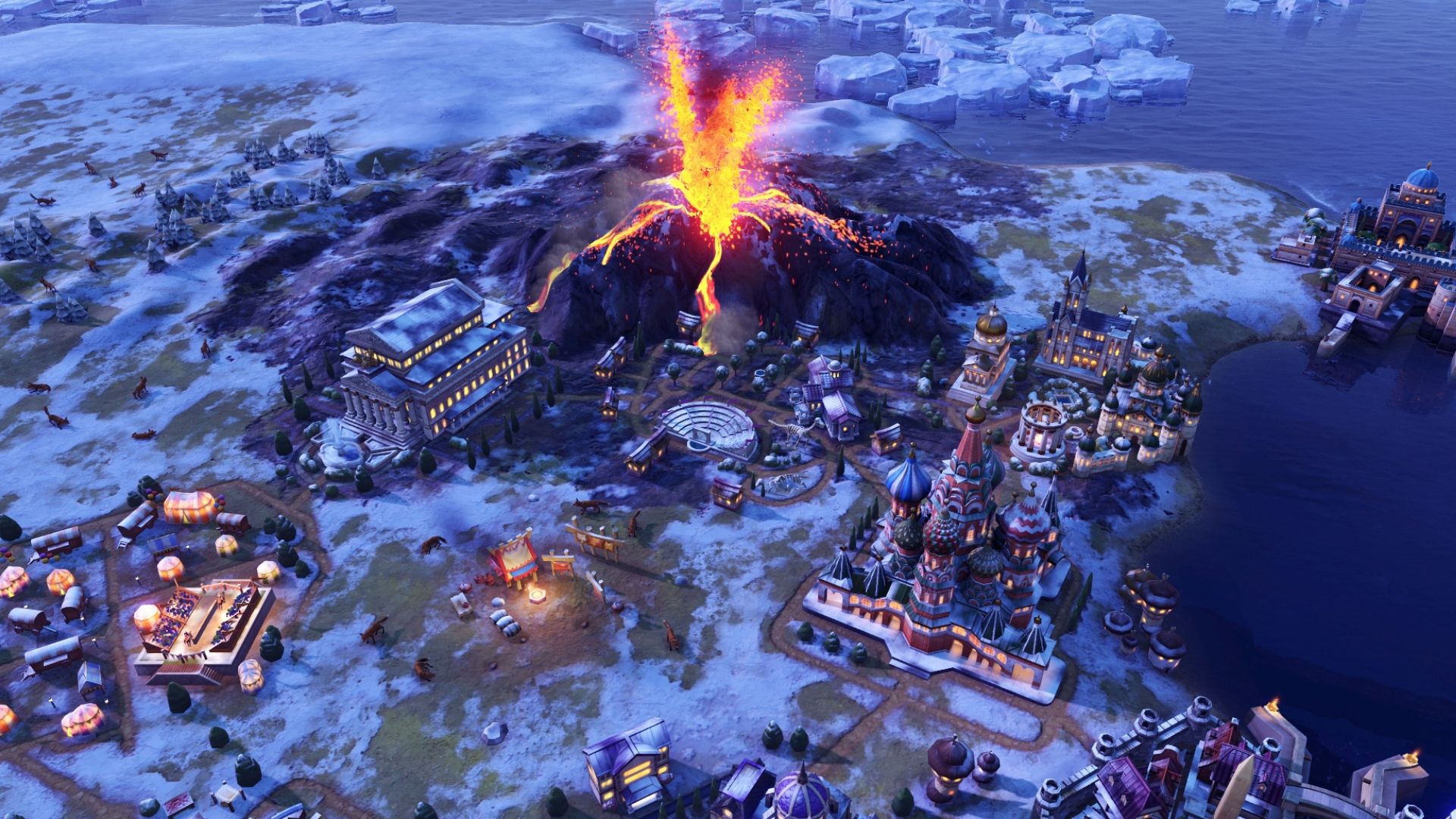 Civilization VI attempts to have all of recorded history in one full game. You start around 4000 BC, with just a group of settlers. Find a good spot with enough natural resources, build up some troops for defence, some builders for farming, and some more civilians.

From there, you glide through history all the way into the near future, as you try to defeat your opponents, whether by force or one of the more subtle victory conditions. It’s a hyper addictive, deep, slick strategy title, and a legend in the genre. If you’ve already had your fill, check out our guide to the best games like Civilization on Switch and mobile to find something new. 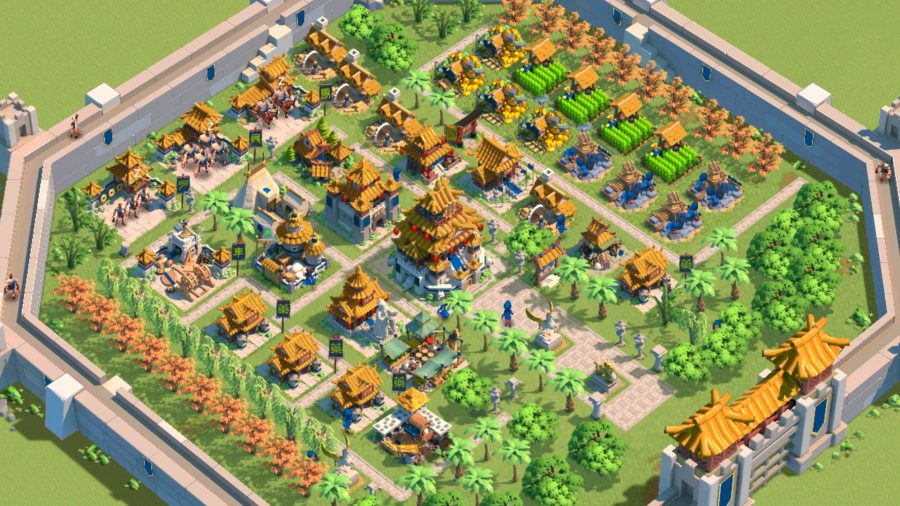 With the success of Civilization comes people taking inspiration from it. Some succeed, like Rise of Kingdoms. From the makers of AFK Arena and Dislyte, Lilith Games, this strategy title puts you in the shoes of a legendary culture, who you need to lead through time, researching useful technologies, building up an army, and pushing to be the victor. For the best start, check out our list of Rise of Kingdoms codes, or our guide to Rise of Kingdoms’ best civilisation. 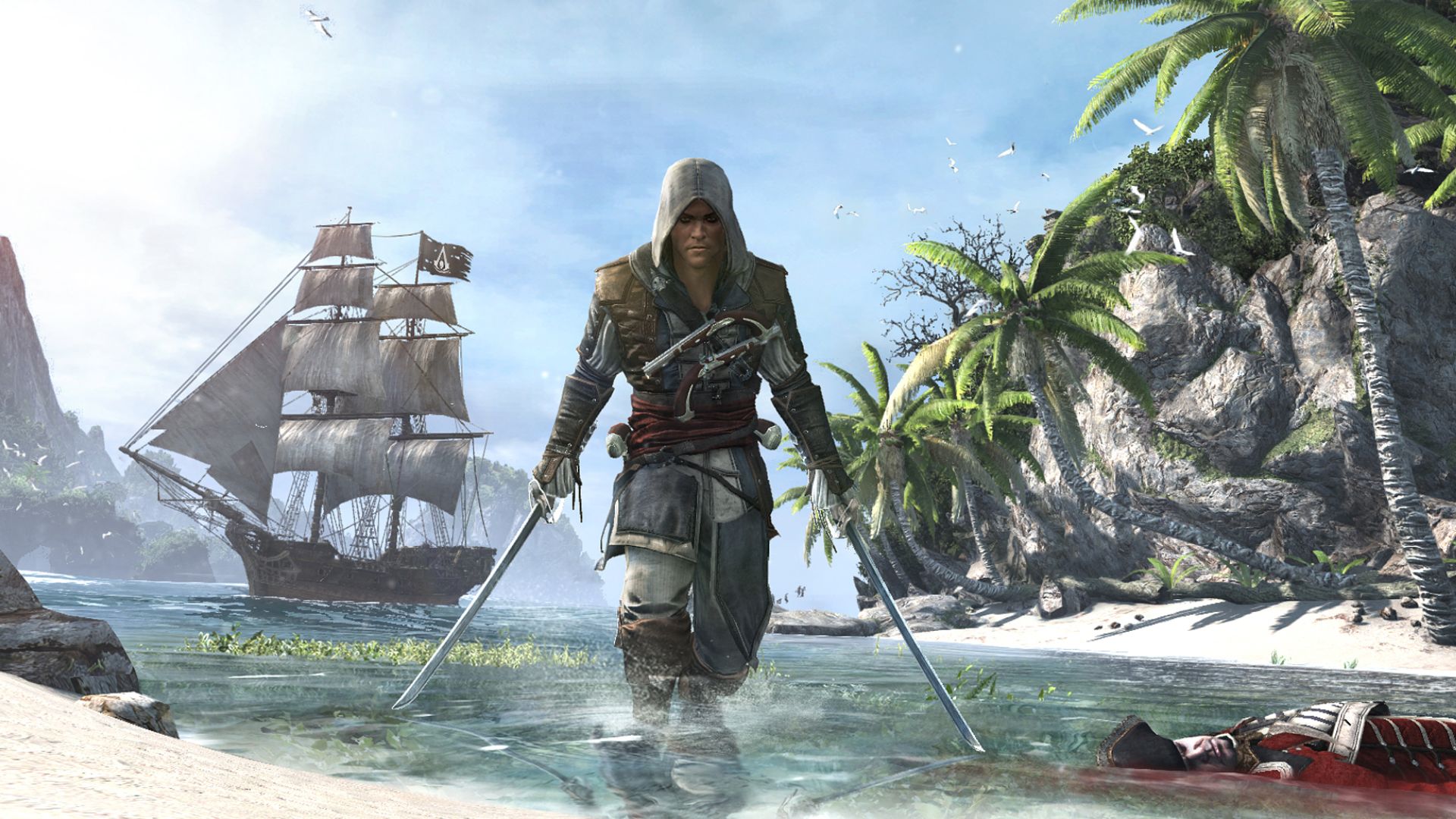 Assassin’s Creed IV: Black Flag is the best kind of historical tourism. It gives you countless Caribbean islands to explore, all with your pirate ship and assassin skills. The story is big and wacky once it gets to the sci-fi stuff, but a lot of the game is a faithful representation of the time period. Not only that, it’s also one of the best Assassin’s Creed games, and many consider it to actually be the best (but we know that’s not true). 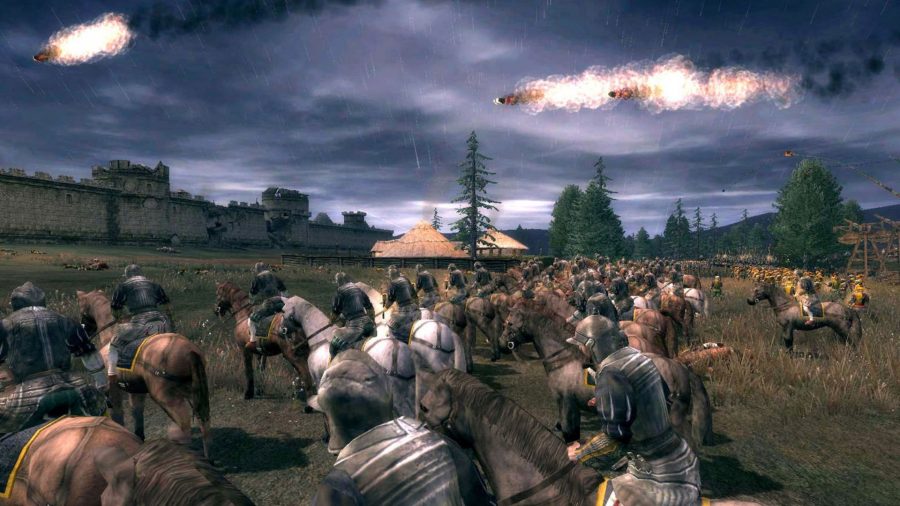 Total War: Medieval II is a proper history game. Or as proper as silly videogames can get. It puts you in charge of a faction, which you have to lead through the medieval period, as you fend off rivals, lead crusades, build up armies, marry off children, and eventually paint the whole map your faction’s colour. When you do end up in battle, things get incredibly tactical, as you direct your soldiers to pull off the best manoeuvres and outsmart your foe. Check out our Total War: Medieval II review to see if it’s for you. 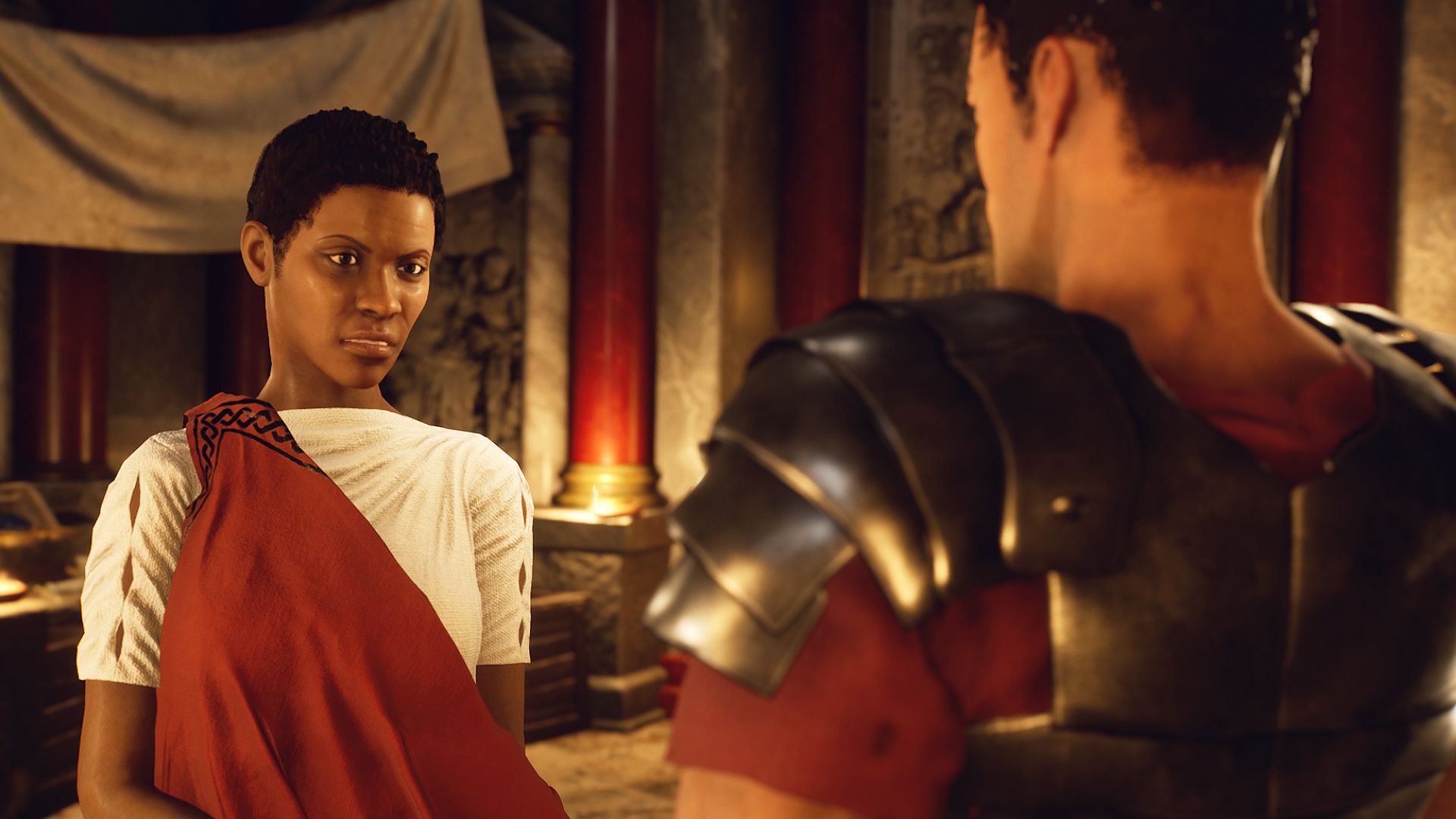 For a game that started life as a Skyrim mod, The Forgotten City is a seriously impressive piece of work. Nick Pearce, writer and lead developer at Modern Storyteller, originally made the mod in his free time around working in law. He then took the risk of leaving that job, dipping into his savings, and making the game for real, after the mod’s success. As you can imagine, it wasn’t easy, but what it led to is one of the most inventive narrative games in years. Oh, and it’s set in Roman times, with a keen eye for historical detail thanks to consultations with professors in the field. Gaudete! 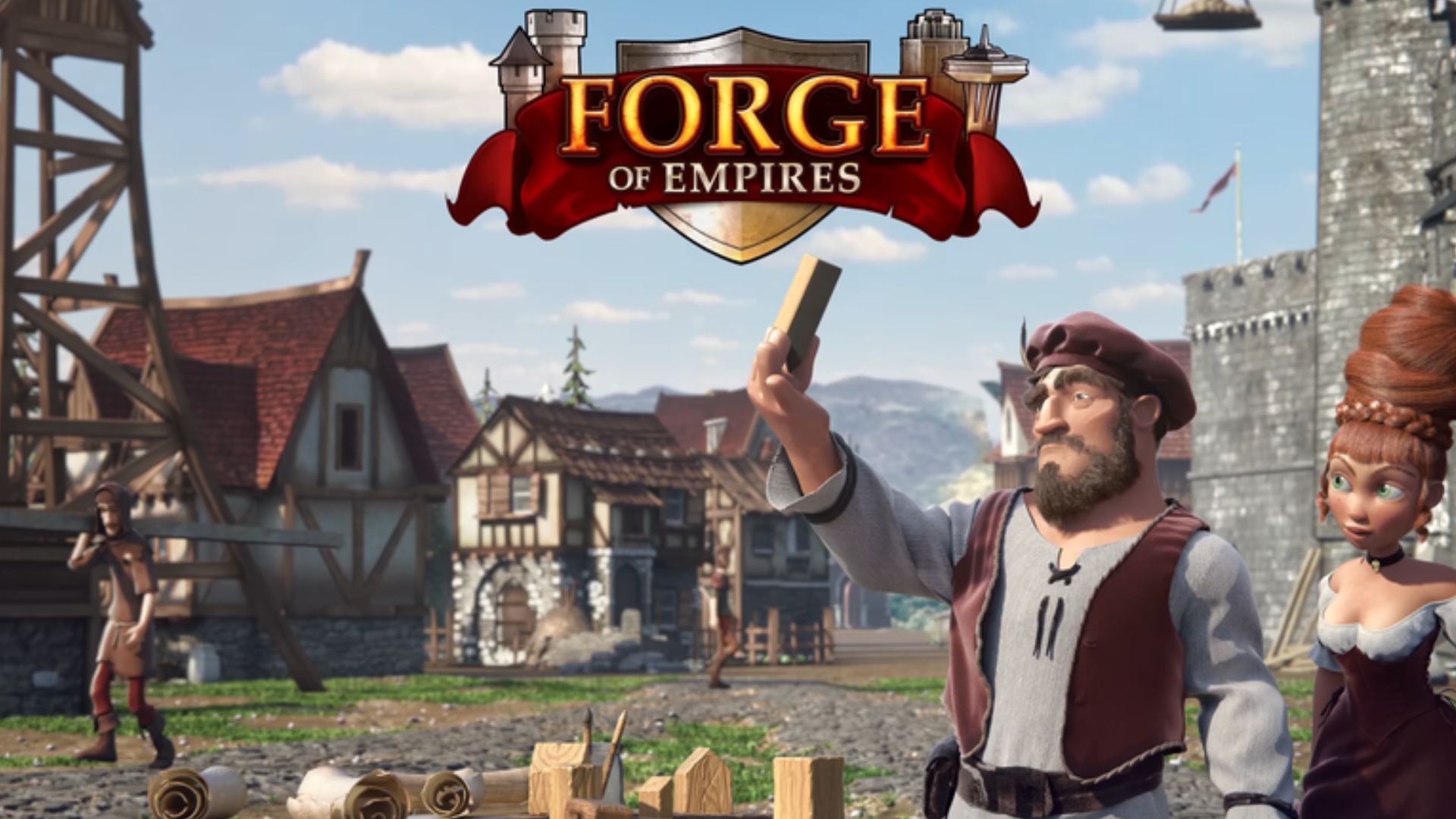 Another game made in the Civilization style, Forge of Empires gives you a faction to lead through history, hopefully flourishing into a global superpower. There’s another layer, though, with tactical turn-based battles against other factions. It has that same thrill that many other games in the genre have, starting you off as a tiny group, and growing into a massive, sprawling empire, all the way into the near future.

Play Forge of Empires for free. 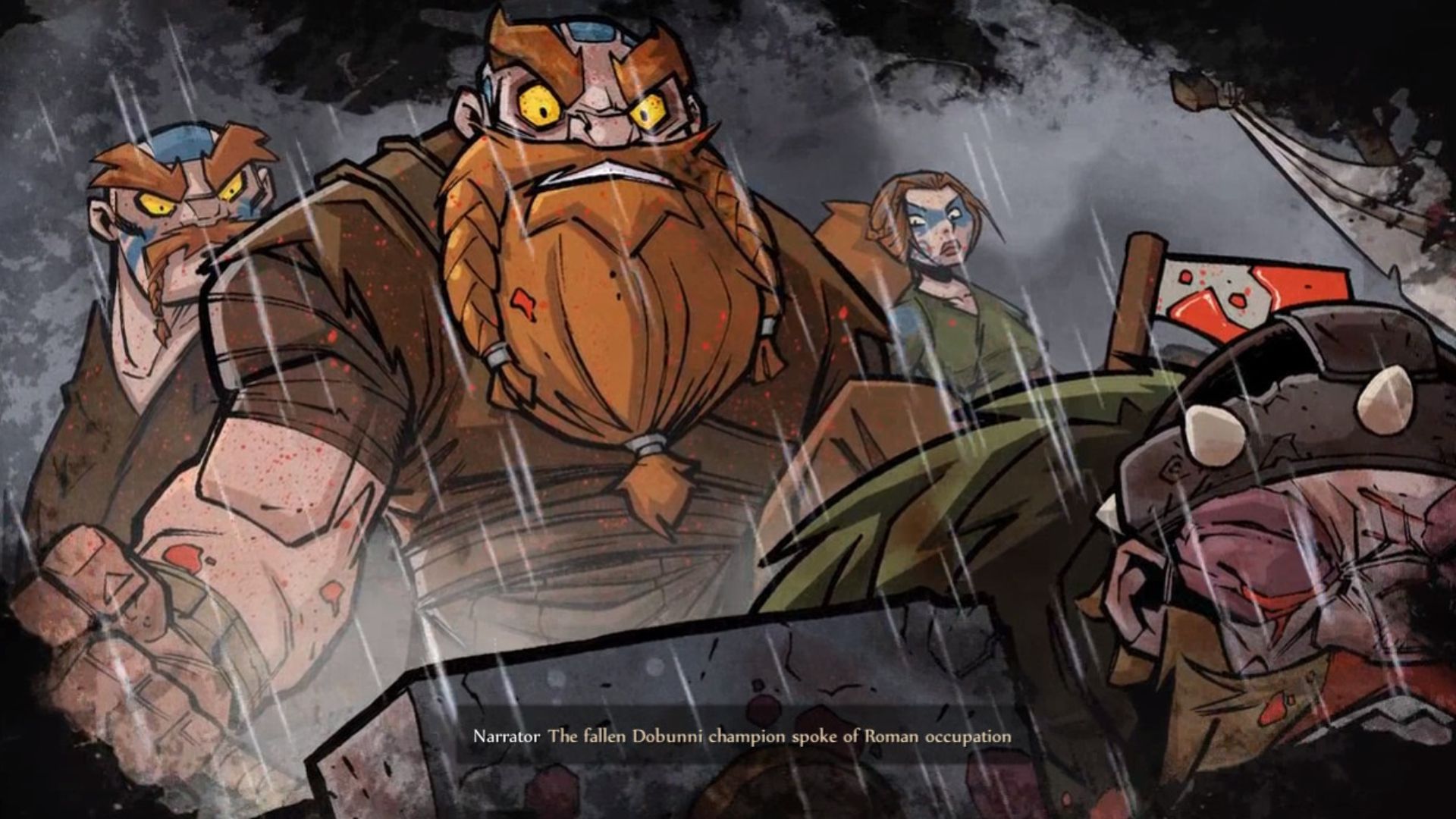 Wulverblade puts you in the shoes of Brittania, fighting off the invading Romans. It’s a side-scrolling beat ‘em up, and it’s pretty hardcore. There are a good few historically-inspired levels and arenas where you can hone your skills. All in all, it’s a unique title in the genre, and it’s a nice mashup of styles worth a look for any fan of the era. 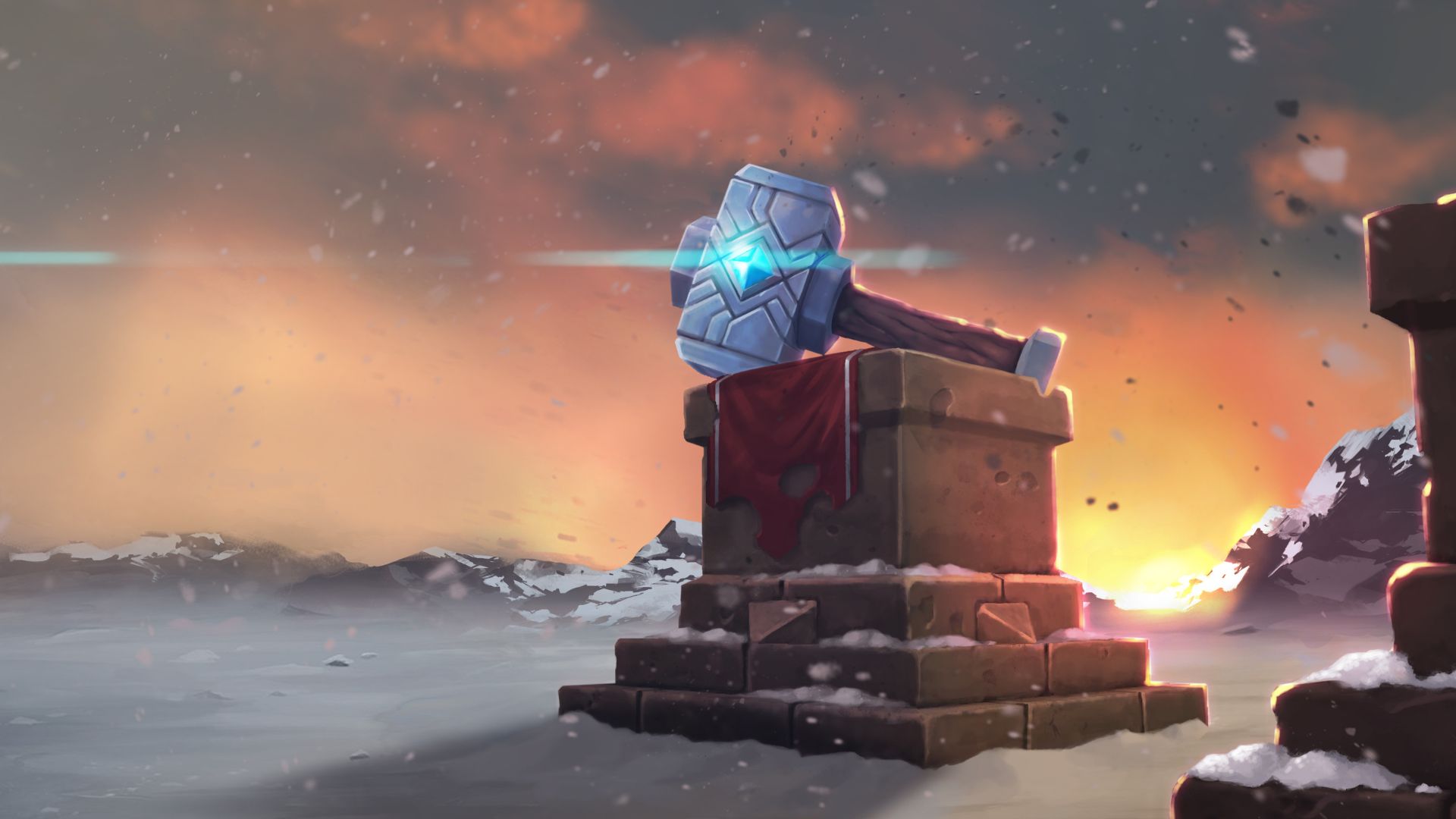 Another RTS title, Northguard is set in the land of Vikings, but while it may be set in a historical era, it also takes in lots of Norse mythology, creating a nice blend of fact and fiction for any grand strategy fans. It’s classic: you build up a settlement, farm and fight, manage resources, expand your kingdom, and aim for victory based on different conditions. For more Norse action, check out our Viking games guide full of recommendations worthy of Valhalla. 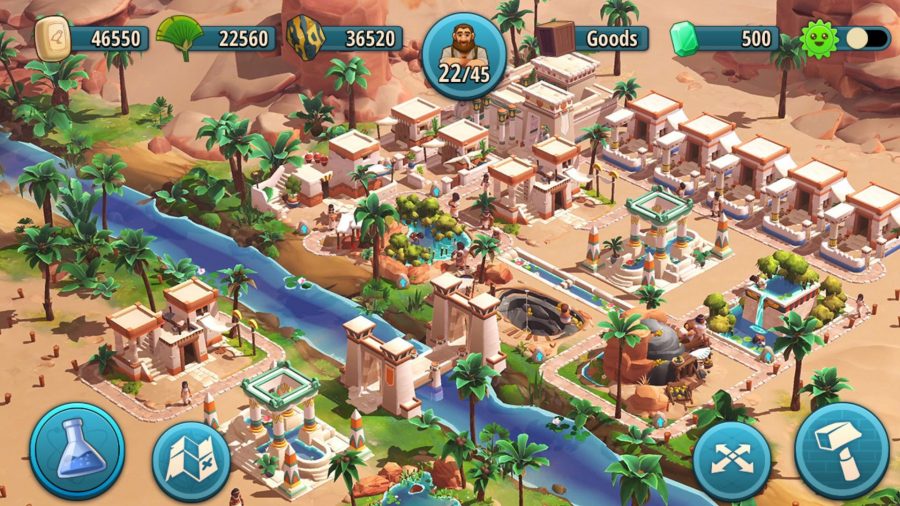 Rise of Cultures pushes the historical mobile strategy titles even further with gorgeous 3D art. It also puts this to good use, with real-world buildings for you to construct. The core of the game is nice and familiar, however, with a focus on building up an empire and leading it to victory through various historical eras. 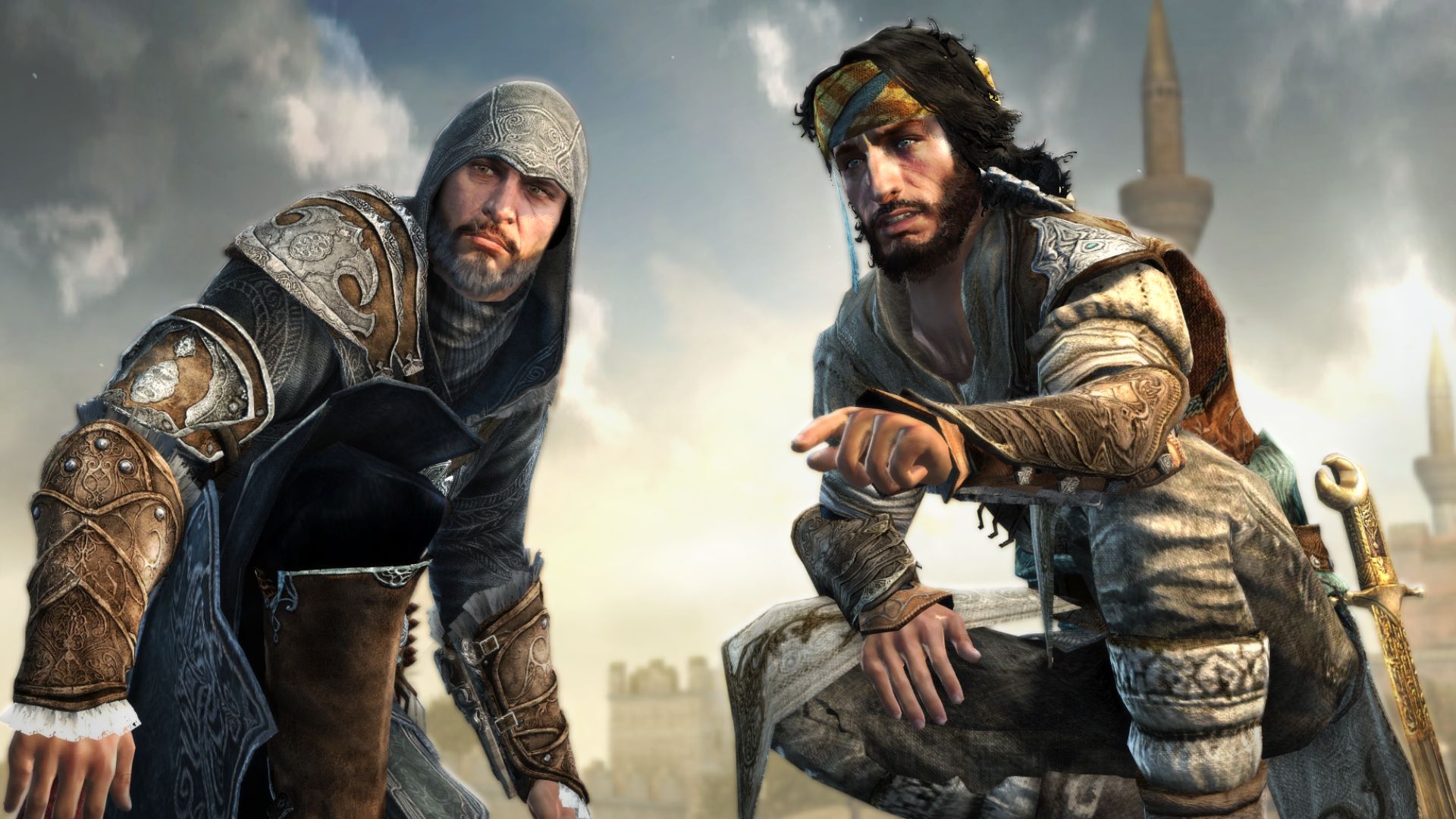 In my Assassin’s Creed: The Ezio collection review, I called it a “portable city break full of many, many murders.” Whatever performance issues the game may have, the feeling of freedom when running around Florence or Venice all in the palm of your hand is unmatched. The Ezio Collection has three of the best games in the series all in one package, and playing them on the go is well worth the cost of entry. 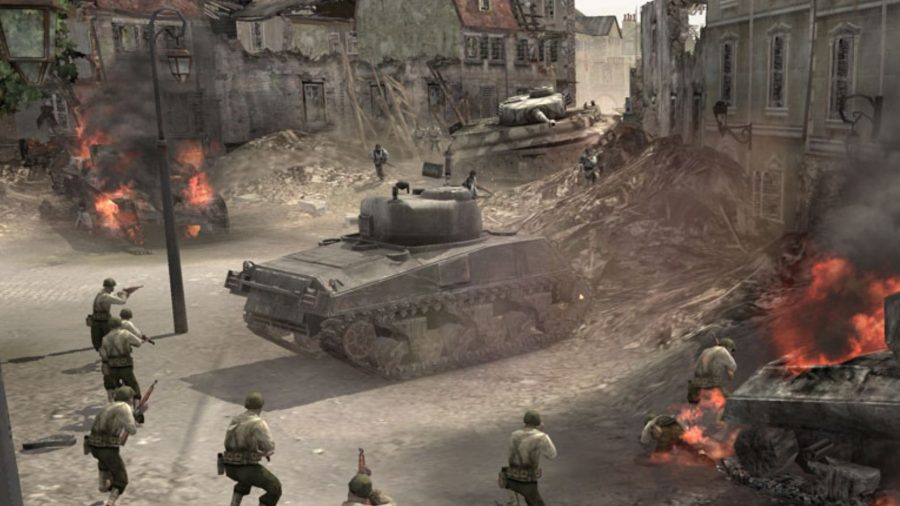 Company of Heroes really pushes for historical accuracy, giving you control over soldiers during WWII. It’s a classic in the strategy genre, one that we absolutely love, as you can read in our Company of Heroes review. Even though it came out in 2006, it holds up admirably, and the universal acclaim it saw at the time feels completely apt today. 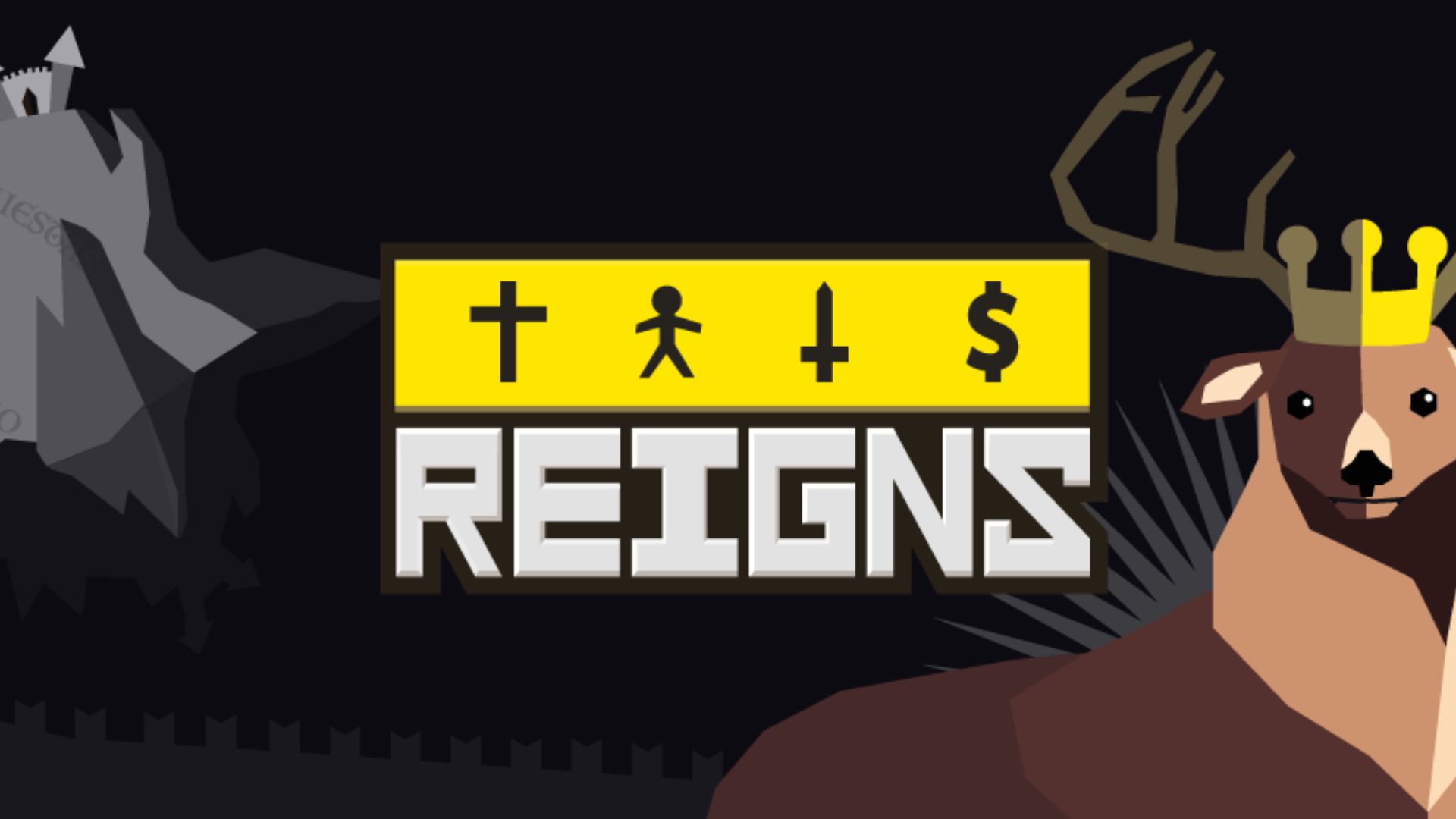 With so many titles in the Reigns series, it looks like developer Nerial has a hit on their hands. In Reigns, you’re a monarch, accepting and rejecting proposals from your subjects and assistants, and so leading your kingdom through many trials and tribulations. But what happens when you die? Make a bad decision, and that can easily happen. But not to worry, as you then take over as your own successor, exploring even further into the future. It’s a very clever little game, and great value too. Check out our Reigns: Beyond review to see why it’s so good. 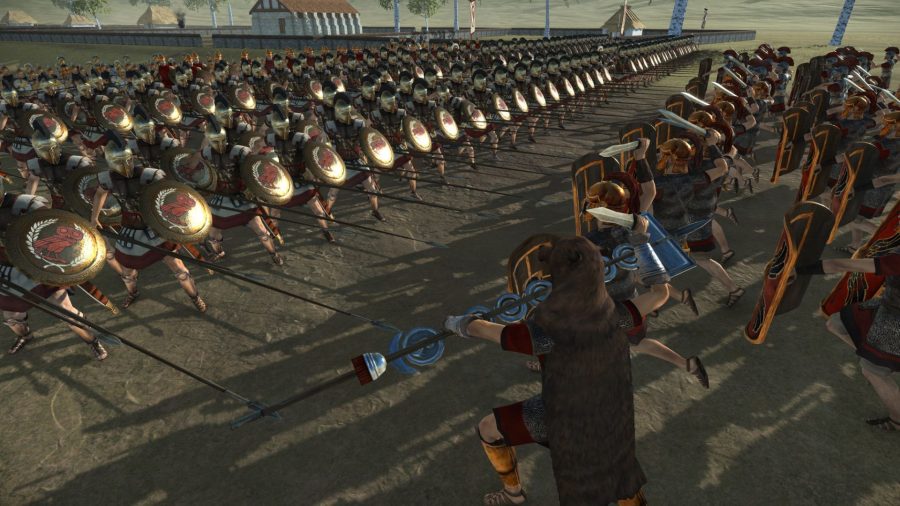 Having two Total War games on one list may seem like overkill, but there’s very little competition for truly great historical games. Rome: Total War may be the best of the bunch. With the classic mix of conquest and strategy, it offers up a great broad view of Roman history, letting the player visualise so much, from the size of the Roman empire, all the way down to tiny details on the soldiers. It might be the best game on this list. 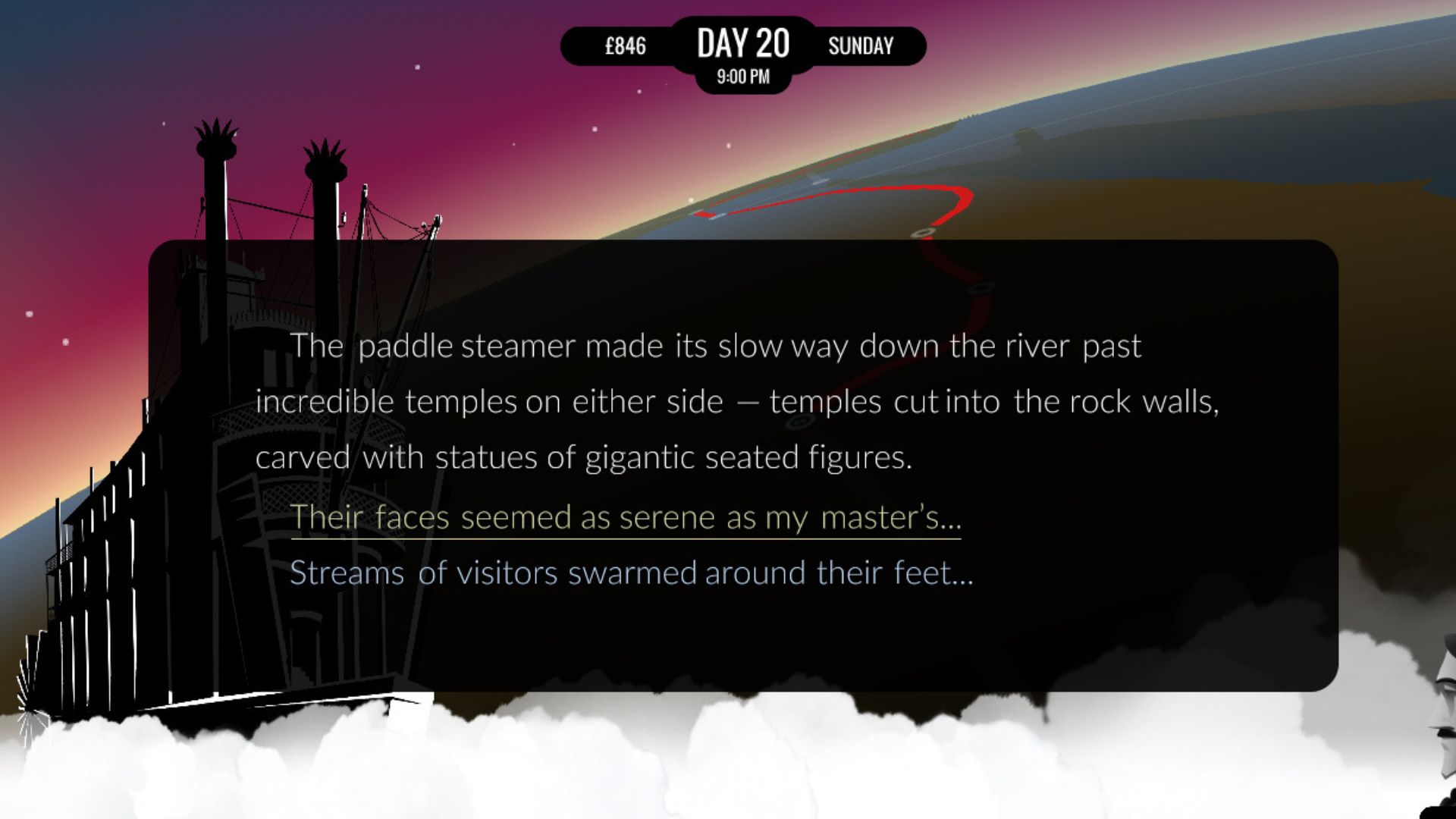 Actually, 80 Days is the best game on this list. I think I include it in as many lists as possible. It’s a narrative game to the max – a playable novel retelling the journey of Phileas Fogg and Passepartout from Jules Verne’s famous novel. But while it may be semi-historical in setting, it’s also got a steampunk twist, not only allowing for endless inventiveness, but also a good skewering of colonialism. Best game ever made? Maybe.

That’s all the historical games we’ve got for you, I’m afraid. For more, why not check out our guides to retro games or city-building games to have even more fun.