Aesperia can be a pretty scary place, with heaps of baddies always ready to sink an arrow into your butt or a poison fang in your neck. Luckily, Tower of Fantasy’s Huma is here to soak up some of that damage with her hefty, powerful shield – then dish out some damage of her own when she transforms that shield into a massive axe!

Impressive, right? Well, if you want to get Tower of Fantasy’s Huma on your side, then you’re in the right place. In this guide we take a look at her banner, best build, team comps, matrices, and more, as well as laying out all of the attacks and skills you can unleash with the help of her awesome Molten Shield V2 weapon.

Who is Tower of Fantasy’s Huma?

Huma is a young woman, currently under the medical care of Hykros after contracting a rare disease that made her develop superhuman strength. She lost all memory of her past, as well as her former personality. As such, the sum of her knowledge about the world since waking up is limited to Hykros, with everything beyond that bringing her anxiety. However, despite being quite an introvert, nothing can stop her when she puts her mind to something. 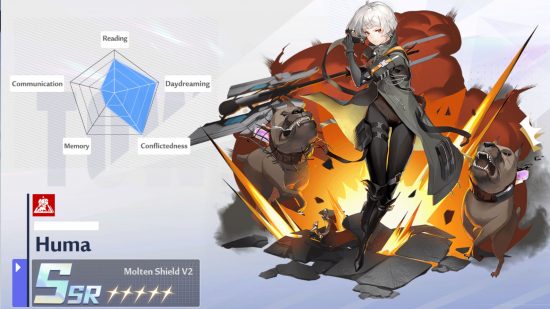 What is Tower of Fantasy Huma’s banner?

Huma, along with her Molten Shield V2 weapon, is one of the SSR Simulacra always available on all weapon banners. This means you can pull her on the Weapons Galore black and gold nucleus banners, or on the limited banner if you don’t pull the featured weapon.

Huma is a powerful Simulacra whose weapon, Molten Shield V2, is fit for both defence and offence. It switches between the high impact axe form and the super tanky shield form, allowing you to both protect and attack with great efficiency. She’s easily the best at filling the traditional tank role out of all the Tower of Fantasy characters we’ve seen so far, and her advancement only amplifies her damage, making her a true force to be reckoned with.

What are Tower of Fantasy Huma’s weapon stats?

Here, we list all the main stats for Huma’s weapon, Molten Shield V2. These are the weapon’s base stats before you level it up or equip it with any matrices. 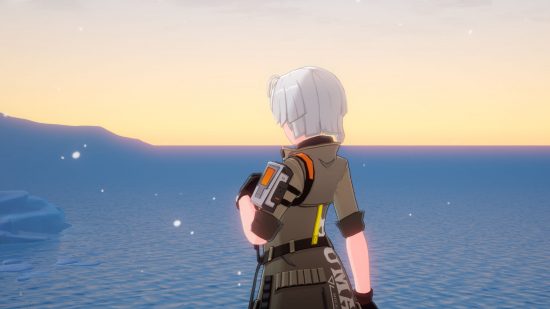 What are Tower of Fantasy Huma’s attacks and skills? 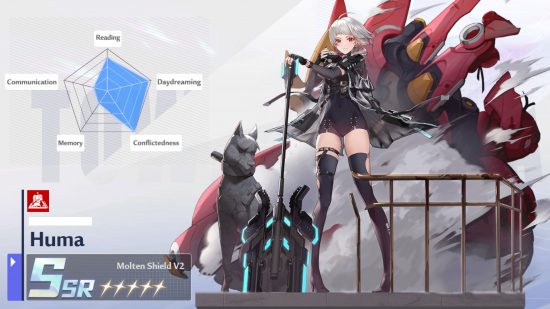 You can advance Tower of Fantasy weapons by using their corresponding fusion cores, which you get by collecting more than one copy of a character. After you get your first copy of Huma and her Molten Shield V2, you can purchase another copy through the Commissary’s weapon store for 120 black gold. Alternatively, you can get a duplicate of Huma by pulling on the banner, but, of course, this is entirely up to RNG.

Advancing your weapons by spending fusion cores and gold unlocks special bonuses. Here are all of the bonuses you gain from unlocking each of Huma’s advancement stars. 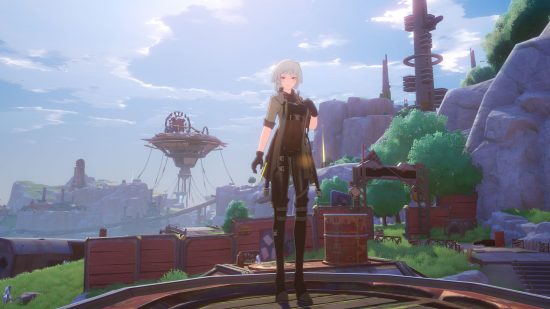 As with all SR and SSR Simulacra, Huma has her own matrix set designed around her kit. This is a perfect choice, as it boosts Huma’s damage and takes advantage of her DoT application. Alternatively, you can mix two of King’s set with two of Shiro’s set to maximise Huma’s shield shatter and damage benefits.

Of course, Huma, King, and Shiro’s sets are all SSR, meaning they can be difficult to farm. If you’re looking for a more affordable SR option, Sobek’s Swamp Shadow is a great choice, as it increases Molten Shield V2’s damage output and attack range. Or, if you want an R-rank set to get you by while you wait for something better, go with Self-explosive for its flame damage boost.

Find out more about different matrix sets, where to get them, and how to upgrade them in our Tower of Fantasy matrices guide.

What are Tower of Fantasy Huma’s upgrade materials? 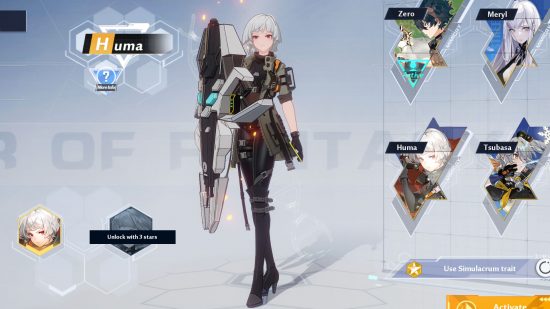 What are the best Tower of Fantasy Huma team comps?

Huma is a great tank character that benefits from the fortitude weapon resonance effect. As such, teaming Molten Shield V2 up with Tower of Fantasy Meryl’s Rosy Edge is a great move. In this lineup, Huma’s weapon offers shields and tankiness, while Meryl’s shatters enemy shields and offers some great damage and CC resist through her spin attack.

For the third slot, you can bring Tower of Fantasy King’s Scythe of the Crow, which deals heaps of damage, offers even more shield breaking potential, and has a quicker hit rate than the other weapons, giving you a bit more mobility and flexibility when needed.

Alternatively, you can replace King with Tower of Fantasy’s Nemesis for amazing utility, with her brilliant healing, electrodes, and impressive volt damage output. She offers great self-sustain, and, when combined with Huma, and Meryl, is brilliant in PVP play.

What are the best Tower of Fantasy Huma gifts?

When scouting gifts for Huma, remember that her favourite tags are everyday items, games, and decorations. We’ve listed all his favourite gifts below, along with their rarity, the number of awakening points they give, and where to get them from. Head over to our Tower of Fantasy gifts guide to find out more. 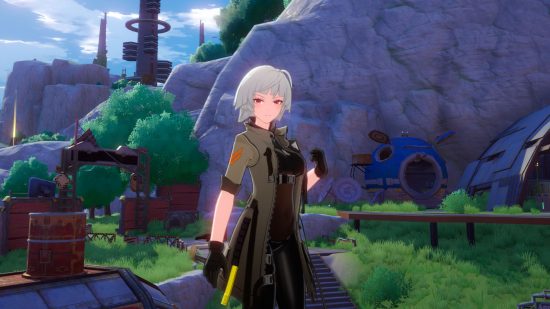 What are Tower of Fantasy Huma’s awakening rewards?

Giving Huma gifts earns you awakening points. When you hit certain awakening progress milestones, you also unlock recollection rewards. Here are all of Tower of Fantasy Huma’s awakening rewards. Keep in mind that you can use a Simulacra’s unlocked trait without taking on their appearance by toggling the ‘use Simulacra trait’ switch underneath them in the Simulacra selection page.

Who is Tower of Fantasy Huma’s voice actor?

Huma’s English voice actor is Colleen O’Shaughnessey, who you may recognise as the voice of Tails from Sonic, Monica von Ochs and Kronya from Fire Emblem Warriors: Three Hopes, or one of her many other roles including a multitude of characters from Naruto, Danny Phantom, and What’s New Scooby Doo.

Huma’s Japanese voice actor is Rie Takahashi, who has voiced many iconic characters including Genshin Impact’s Hu Tao, Megumin from Konosuba, Emilia from Princess Connect, Hikari from Pokémon Masters, and many more.