Being able to play Skyrim on the go is quite a special experience. Sure, there are some sincere issues with the game, but its legendary status exists for one very fair reason: it’s pretty cool. Running around a large space is fun, especially when there are dragons and monsters and the promise of being able to do whatever you want.

So, getting that experience on an aeroplane for the first time was something I wanted immediately. As soon as I saw that clean-shaven man on the plane in the Nintendo Switch announcement trailer, I wanted to be him. So I bought a Nintendo Switch. And now look where we are. I’m writing about the Skyrim map.

Well, that’s really just a side story to say via a couple of roundabouts: Skyrim is on Switch and it’s pretty cool. So, if you’re the type of person who needs to spend fictional decades doing every last thing in-game, then you might want some tools to help you out. The first on that list should be an interactive Skyrim map. That can help you a whole lot. So, what are you waiting for? Head below and grab them.

So, in a list below are three options for an online Skyrim map. They all offer something a little different, so pick the one that best suits your needs. 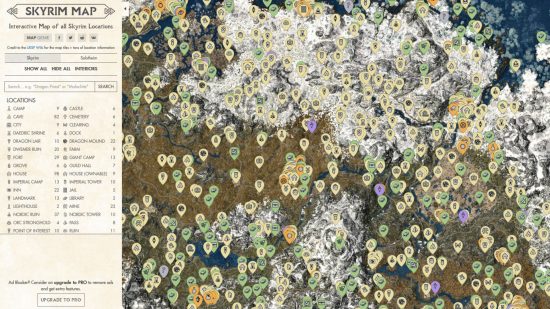 My personal pick is the Map Genie Skyrim map. I’ve used it for years, thanks to its ability to remove found items, set custom locations, and just a general usability that outstrips most others. You can’t exactly get down into the weeds with nitty gritty systems like other maps, but this is clean and simple – the iPhone of Skyrim maps. You’re not going to emulate a 3DS on it, but you are gonna make a phone call pretty quickly… if you know what I mean. 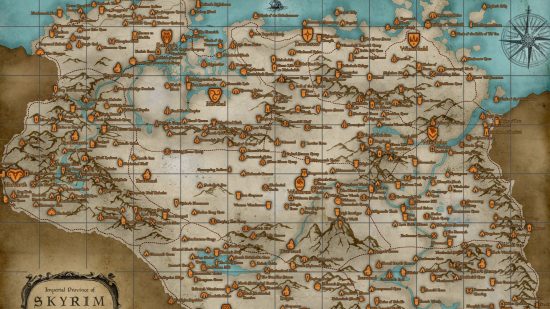 Game Banshee’s Skryim map is beautifully simple. One massive high-resolution image covers the whole area. You can’t interact with it, but with its simple clarity and immediate readability, it becomes a wonderful example of what the in-game Skyrim map could have been. Imagine if heading to the map while playing the actual game led to this much immediate knowledge of wherever the heck you are. If you want more detailed annotations, head to the Elder Scrolls wiki to get links to the different locations dotting the map. 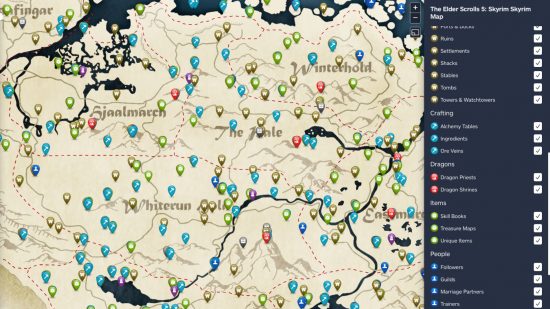 The IGN Skyrim map is kinda full of paraphernalia. Stuff, not for stuff’s sake, but for the sake of someone who wants to be able to do absolutely everything with their interactive map. Click on a location you’re interested in, check it off when completed, or head to one of the related pages to find out more. It’s pretty excellent, even if the icons look like they were designed for 2011’s Tap Pet Shop rather than, y’know, 2011’s Dark Souls, Skyrim, or Dragon’s Dogma.

There we have it. A whole bunch of Skyrim maps that could explode the brains of cartographers from the fifteenth century. For more, check out our games like Skyrim, the best open-world games, and magic games guides.