As soon as a new name shows up in Genshin Impact, you can guarantee that there will be a r/mains subreddit within a few hours, and a whole heap of leaks and speculation floating around to boot. That’s no different with a fresh, faceless character, Genshin Impact’s Mika, who’s currently brewing up a frosty storm among the community.

Of course, Hoyoverse is yet to confirm any real details on Genshin Impact’s Mika, and we’ll be sure to update you as soon as they do. But, for now, we’ve gathered all the little crumbs of info we could find on this illusive new character, right here for your perusal. Just take the leaks with a grain of salt – they’re all subject to change in Mika’s full release.

Who is Genshin Impact’s Mika?

According to leaks from respected leaker UBatcha, Genshin Impact’s Mika is an upcoming cryo polearm unit, though we’re unsure of whether he’s going to be a four-star or a five-star.

We got our first official peak at him through the Genshin Impact 3.1 livestream, suggesting that we’ll get to meet him during the new update. He introduces himself as a surveyor of the Reconnaissance Company, then goes on to read out Grand Master Varka’s letter, occasionally stumbling over his words and shifting nervously.

Despite his shy demeanour, it’s believed that Mika is tasked with carrying out expedition missions, and that he used to be a surveyor in Eula’s team, before the Grand Master appointed him to be a key member of the front-line scouting team. Despite his high position, he’s shown to be shy and nervous around others.

Mika has large, sleepy blue eyes and messy blond hair, and shares the same model as Genshin Impact’s Xiao or Genshin Impact’s Bennett. His outfit follows a blue, white, and gold colour scheme similar to the uniforms of the Knights of Favonious, and he wears multiple feather or wing-like emblems. 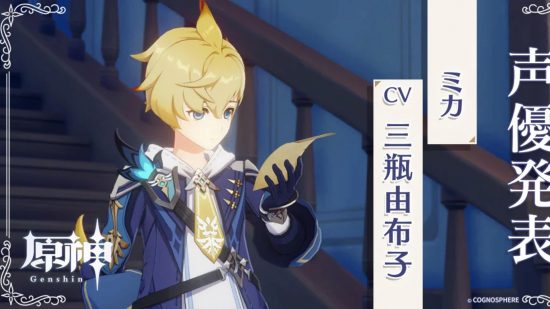 As mentioned above, the Genshin Impact livestream suggested that we’ll be seeing Mika for the first time in-game during 3.1, which is due to come out on September 28.

However, when it comes to his release date and banner, it’s hard to say. We don’t have any confirmations on that yet, and many other Genshin Impact Sumeru characters are appearing in the storyline prior to them having a banner. Hopefully he’ll be joining our roster soon, and we’ll be sure to update this page as soon as we find out more.

That’s everything we’ve got on Genshin Impact’s Mika right now. If you want to dive into another exciting, open world adventure, check out our Tower of Fantasy characters guide and Tower of Fantasy tier list.