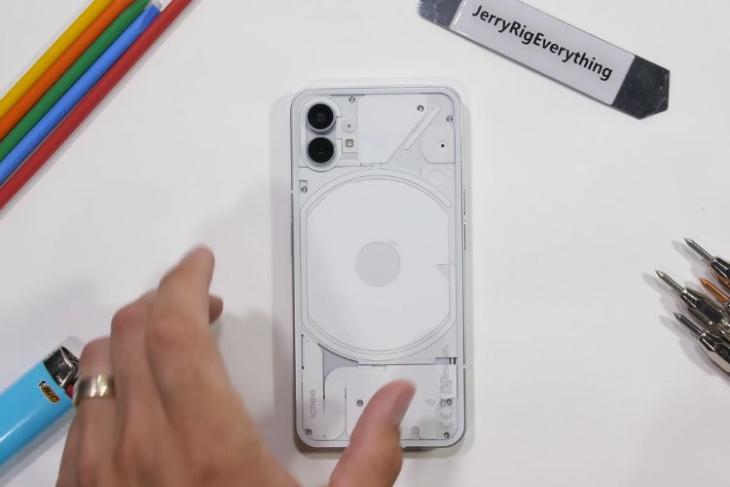 Ever since its launch, the Nothing phone (1) has attracted quite a negative limelight. From buggy software to quality control issues, we have heard it all. But, there’s some silver lining (besides the on-paper goodness)! The phone is quite durable and this has been proven in the latest durability test conducted by YouTuber JerryRigEverything. Here are the details to know.

Nothing phone (1) Passes the Durability Test!

The Nothing phone (1) took YouTuber JerryRigEverything‘s famous durability test and it was found that the phone passed with flying colors.

The phone (1) comes with a pre-installed plastic screen protector, which is a good thing. In the video, a scratch test is run and the phone got minor scratches at level 6 and “deeper grooves” at level 7. This is standard for a glass display. There was the fire round too and the display got a white mark after 40 seconds under the fire but the pixels could be recovered and this didn’t cause any damage.

So, the Nothing phone (1) is good enough to endure scratches and well, fire too. Now, comes the bend test. The Nothing phone (1) with a recyclable aluminum frame, stood its ground when bent from the back. Although, there was a slight flex when bent from the front. There were noises too and while it appeared to be breaking, the phone stayed intact. The LEDs were also put.

Nothing too concerning emerged. So, we can safely say that the Nothing phone (1) is durable! Durable than the expensive OnePlus 10 Pro, which failed the JerryRigEverything‘s durability test. You can check out JerryRigEverything’s video below to see for yourself. Bear in mind, these are some cruel tests so see if you really can!

There’s a Nothing Phone (1) Teardown Too!

The Nothing phone (1) also went for a teardown, conducted by the YouTube channel PBK Reviews. And this is where there’s some disappointment. It was revealed that the phone (1) has a complicated build with all the components, screws, and whatnot.

As a result, the smartphone can’t be repaired easily. If you are wondering you can, it might not be the case. The phone (1) got a score of 3 out of 10 on the repairability scale and it was also revealed that finding repair parts is also a task. You can head over here to see the whole process.

And, do share your thoughts on the Nothing phone (1) durability test and the teardown in the comments below.