First things first, let me give you a little background on my adoration for Digimon before we get into the nitty gritty world of Digimon Survive. As a bright-eyed child, I was absolutely obsessed with the anime and games, I woke up early on Saturday mornings to catch up on Matt and Gabumon, saved up all of my pocket money to buy Digimon World 2003, and slept with a Digivice in my hand, hoping to get pulled into the digital world while I slept.

Now, as an adult, I have a Psychemon (the cooler Gabumon) tattoo on my arm, about ten Digivices, and a backpack covered in Digimon sprites that I take with me to the supermarket every day. So, now you know all that, I’m sure you can sense how excited I was when Bandai Namco revealed Digimon Survive back in 2018.

There are a few things you need to know about Survive, firstly, this is no longer a game for children. Digimon games have always had sinister moments. Cyber Sleuth has some side missions that send shivers down your spine, and the World games include the eventual deaths of your partners. However, Survive pumps this up to 11 as everyone around you is a potential victim, and you must watch as those around you gradually lose their sanity.

Secondly, if you don’t enjoy visual novels, this is not the game for you (it also doesn’t have English voice acting). Producer Kazumasa Habu and trailers for the game make it very clear that it’s about 70% visual novel and 30% RPG. I believe you can skew this number either way depending on how you play the game, but I’ll get into that a little bit further down. 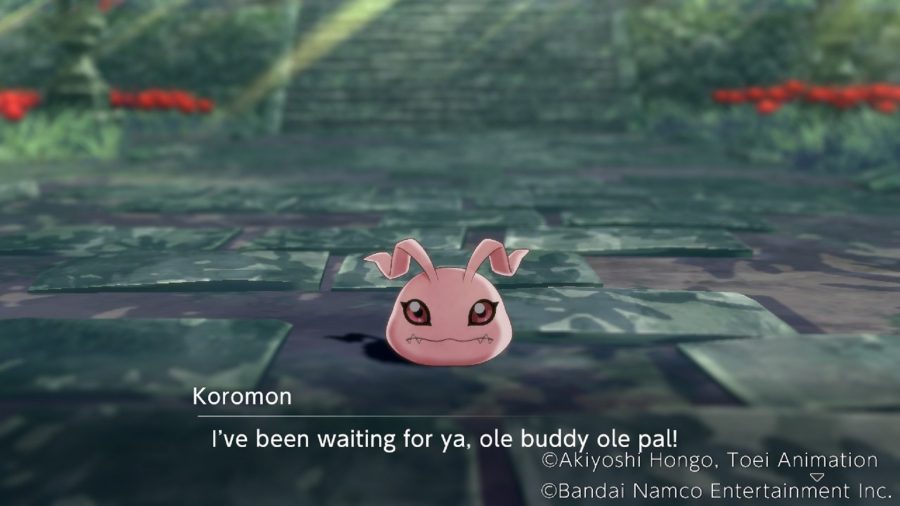 If you’re okay with both of those things, you’re going to absolutely love Digimon Survive. I went in very aware of the game’s vibes and I’ll admit, as someone who hasn’t played too many visual novels, I was nervous. The game begins at a vibrant summer camp, a gorgeous anime-style cutscene introduces you to all of the characters at an old school, and then you get to spend a little time walking past cherry blossoms that look like cotton candy as the sun streams through the branches.

This calm doesn’t last long though, as you soon reach a dank shrine, the ground begins to shake, and you fall unconscious. When you awaken, you appear to be back at the shrine, but things feel wrong. Despite awakening in this eerie place, I couldn’t help but feel a little overjoyed as an adorable Koromon bounced out of the bushes and introduced himself with his crackly little voice. Surprisingly, the main character acts much as I would and soon forms a strong bond with Koromon, and they decide to head off to work out what in the (digital) world is going on.

You meet up with a few familiar faces from camp and decide to head back to the old school. The building is no longer vibrant and full of life, it’s covered in deep green vines that tangle and weave around broken windows and overgrown vegetation. How long were you unconscious? That’s all I’m going to divulge about the story. Everything from here is so exciting and incredibly grim. I want you to experience your friend’s slow decline into madness and see the bonds grow between human and Digimon. 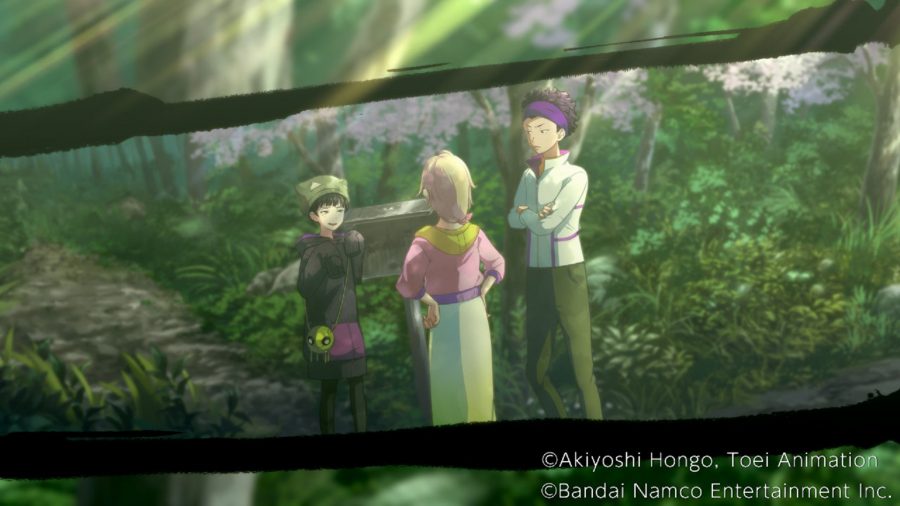 A lot of the game involves you making choices and speaking to your friends to try and build bonds with them. You can take a moral, wrathful, or harmonious path, I chose the latter but am genuinely a little surprised that some of the options don’t actually match up how I thought they would and how my friends would react to things I say to them. I’m unsure if this says more about me or if the game is a little funky, but it really doesn’t hinder my experience with the game in the slightest.

Outside of the visual novel aspects, there’s also tactical combat that’s reminiscent of Fire Emblem and Final Fantasy Tactics. You frequently get the chance to explore the map and can choose to ‘free battle’ to train or even speak to the baddies, getting a chance to recruit them to your team. It’s very easy to get distracted by these battles and spend a lot of time honing your skills in preparation for the big bads you may encounter later down the road.

As I mentioned above, Habu made it clear that the game is about 70% visual novel sections. Although I agree with this on paper, that number can change drastically depending on how often you choose to free battle. I recommend, on a first playthrough, that you enjoy the story and stick to the 70/30 split. Then, for new game +, feel free to skip all the dialogue and flip those numbers – free battle to your heart’s content! 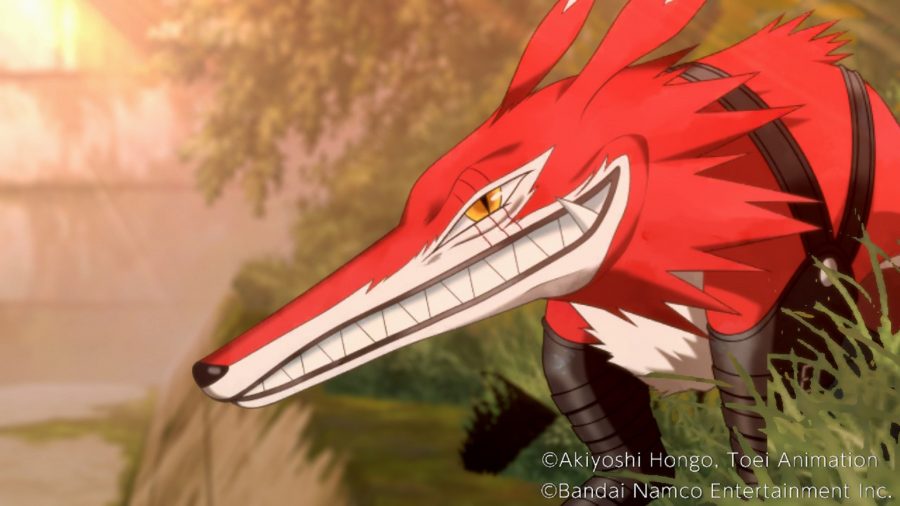 Moving on from what you can expect out of the gameplay, I must commend the game for its absolutely gorgeous art style. With the vibrant ruby red of the spider lilies, the cotton candy pink cherry blossom, and the deep emerald green of the vines that cover the old school, I can’t help but be in awe of every scene.

After taking in the scenery, you’ll soon be enthralled again by the soundtrack. When the crew is happy, the music is light and airy, but when horrible things are going on, the track turns suitably deep and sinister. I specifically want to highlight the world map theme, as it’s reminiscent of the main theme from Zelda Ocarina of Time. A lot of thought and time obviously went into Survive and I really appreciate it.

I can sense the inspiration Survive has taken from other games, persuading Digimon to join you feels a little bit like recruiting in the Persona games, but I do wish Bandai Namco went a little further. I’m sad this game doesn’t allow you to walk around the environments, even just a little. If it had Persona 3-esque dungeons I think my score would go up by a number of two, because as much as I enjoy a good story, I also love a good wander around. 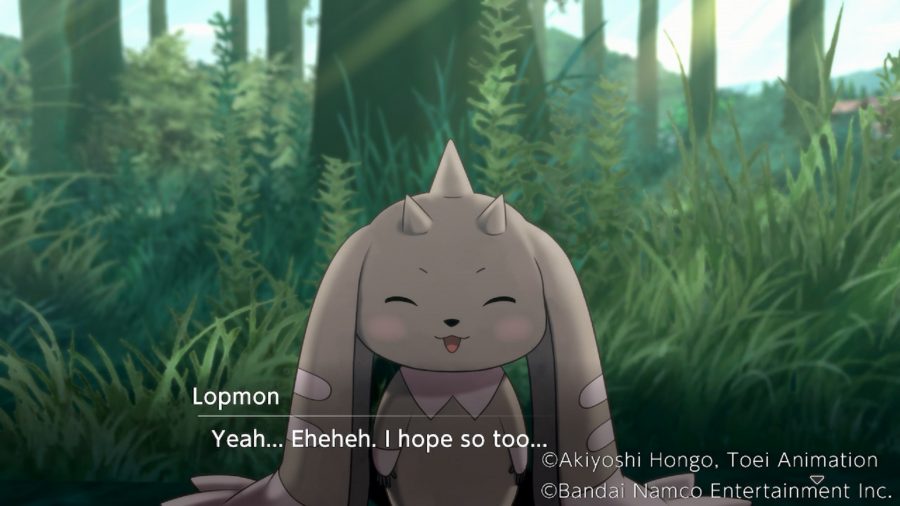 I’m enjoying Survive far more than I thought I would. It’s the most beautiful Digimon game to date and shows that the series knows how to grow with its fans. Anyone of you who grew up with those cute little critters will no doubt enjoy this entry, even if you’re not a big fan of visual novels.