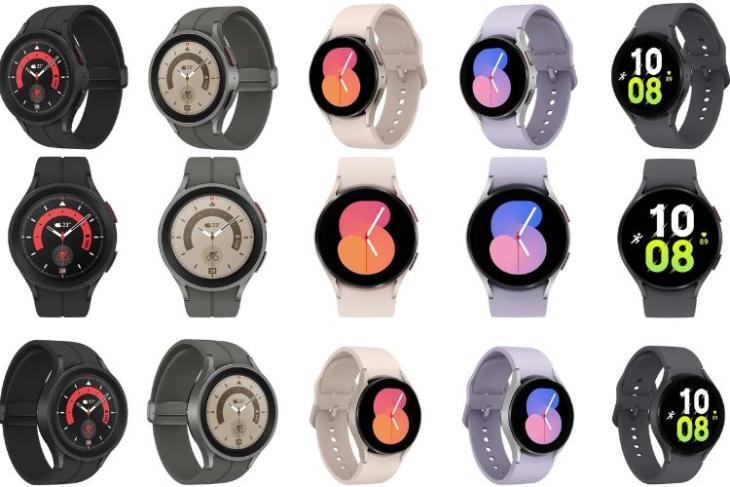 While the Galaxy Watch 5 Pro is seen in black and grey color options with a Sapphire Crystal build, the Galaxy Watch 5 appears more colorful with options like purple (Bora Purple as Samsung appears to call it!) and peach, along with the classic black.

Both of them are seen with a bezel-less round display but without the famous rotating bezel, which was seen missing in previous leaks too. The round dial is seen seamlessly blending with the silicon straps and has two physical buttons too. You can check out the render below.

While the design part won’t witness a lot of changes (this is expected for the Galaxy Z Fold 4 and Z Flip 4 foldable too), you can expect a few changes under the hood. Both smartwatches are expected to come in 40mm and 44mm sizes and have both LTE and Bluetooth variants.

An improved chip, a bigger and long-lasting battery, and the recently announced One UI 45 based on Wear OS 3.5 are highly expected too. Rumors are also rife that Samsung will include a body temperature sensor in the Galaxy Watch 5 series, which is also expected to be integrated into the Apple Watch Series 8.

More improvements are expected but nothing is official as of now. We shall get all the confirmed details at the Galaxy Unpacked event scheduled for August 10. Hence, stay tuned for all the updates you need, and do share your thoughts on the rumored Galaxy Watch 5 series design in the comments below.