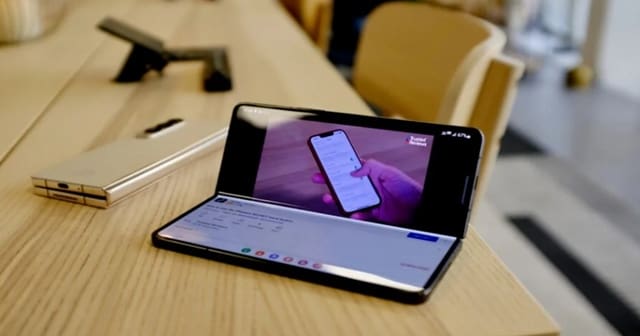 Samsung is rolling out the latest One UI 4.1.1 based on Android 12L to its Galaxy Z Fold 3 and Galaxy Z Flip 3, coming to all users over the days.

This update has been installed by default in Samsung’s latest foldables – Galaxy Z Fold 4, and now coming to older foldable devices. It brings a number of features curated specially for foldable phones, like a taskbar to dig up the most used apps, split screen, direct dial, and voice-to-text or emoji.

One of the few OEMs that care about passing updates regularly after purchasing its products is Samsung. The South Korean company has stuffed in the latest One UI 4.1.1 based on Android 12L in its Galaxy Z Fold 4 devices, launched recently.

And now, it’s rolling out the same to Galaxy Z Fold 3 and Galaxy Z Flip 3 devices. Scheduled to reach users over the coming days, the new One UI 4.1.1 based on Android 12L has several features and optimizations for large-screen devices.

Some include a curated Taskbar, multitasking gestures, and optimizations to first-party apps. Explaining them, the new Taskbar brings a new two-finger gesture for quickly switching between full-screen and split-screen views, a new option to set custom call backgrounds for contacts, and optimizations for a couple of Samsung apps.

Further, there’s quick access to pull the frequently used apps and the ability to use frequently-used app pairs in split-screen mode. There’s even a Direct Dial feature to let you quickly call your favorite contacts and dial back missed calls, and the ability to reply to messages with voice-to-text or emoji.